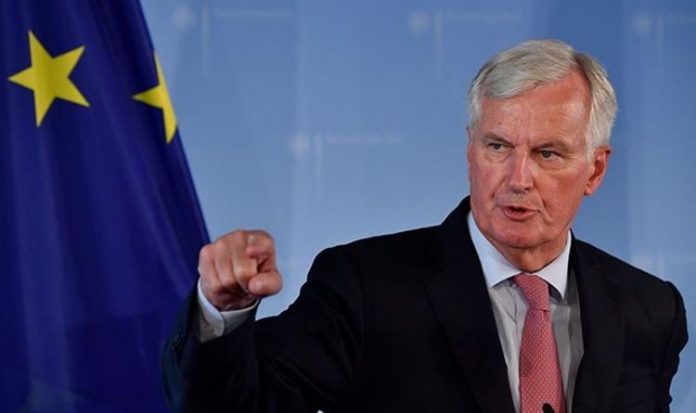 Michel Barnier said yesterday that he was ready to improve the trading block’s proposal for an “insurance policy” backstop arrangement on how to manage the border between the Republic of Ireland – which will stay in the EU after Brexit – and Northern Ireland.

The measure would avoid his previous much-maligned idea of creating a physical customs border on the Irish Sea – which would mean Northern Ireland being treated differently to the rest of the UK.

But DUP deputy leader Nigel Dodds made it clear this would still not be acceptable.

He said: “So Michel Barnier says he can do different kinds of checks between Northern Ireland and the rest of the UK as if that makes it more palatable.

“The fundamental point is that internal UK checks are only needed if it is intended to separate Northern Ireland from Great Britain. Despite the talk of ‘improvements’ the backstop being insisted upon by the EU… still means a border down the Irish Sea although with different kinds of checks. The fact is that both Theresa May and the Labour Party have said no British prime minister could accept such a concept.”

With just over six months to go before Britain leaves the EU, reaching agreement on a backstop arrangement for the border between Northern Ireland and the Republic remains the thorniest issue in negotiations.

British Prime Minister Theresa May rejected the previous EU proposal on how to avoid a hard border on the United Kingdom’s only land border with the EU, saying it would effectively slice Northern Ireland away from mainland Britain, a position staunchly backed by her pro-British allies in Belfast.

The concern is that Northern Ireland would have to be granted a special status — meaning it would effectively stay inside the EU economic space, but at the cost of new differences with the British mainland, which both Mrs May has complained would threaten British sovereignty.

And after the her conservative government lost its majority in last year’s snap election, she is dependent on the support of DUP MPs to pass legislation.

Speaking on the eve of the latest EU summit in Salzburg, Austria, Mr Barnier said negotiations were reahing the “moment of truth”.

He said that the EU was ready to improve its proposal for the original “insurance policy” backstop plan for the Ireland issue.

Mr Barnier revealed that he was reworking his plan to make clear how, in the event the “insurance policy” were ever activated, it would not create a physical customs border on the Irish Sea, but instead operate by checks on goods along the Britain-Northern Ireland route.

He said: “Our proposal for the backstop on Ireland and Northern Ireland has been on the table since February. We are ready to improve this proposal.”

Mr Barnier added: “Clarifying which goods arriving into Northern Ireland from the rest of the UK would need to be checked and where. We can also clarify that most checks can take place away from the border, at the company premises or in the market.”