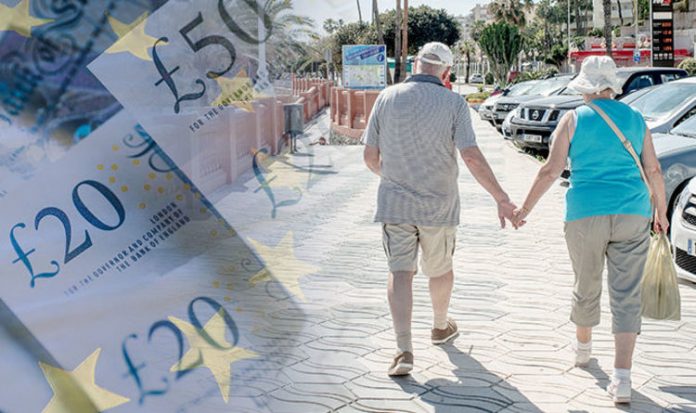 The warning to “Brexit-proof” their finances for the 1.8 million British expats living across the EU has come from the world’s largest independent financial advisory, deVere Group.

If the pound plunges in the wake of a no-deal exit, the cost of living would be more expensive for expats, according to the group.

DeVere claims expats pensions could also be at risk in the event of a no deal.

James Green, divisional manager of Western Europe at the deVere Group, said: “A no-deal Brexit is now expected by a growing number of experts and the wider population to be the most likely outcome.

“If the UK crashes out of Europe with no deal in place, the estimated 1.8 million expats living in the EU could be financially impacted in two key ways.

“First, the pound would inevitably suffer and it could fall hard. This would deliver another heavy and serious blow for those who receive UK pensions or income in pounds as the cost of living, in effect, would be significantly more expensive.

“Second, unless there is considerable post-Brexit collaboration between the UK and EU there is a risk that existing payments from British companies, including pension and insurance companies, to those living within the European Economic Area (EEA) could be disrupted or even made impossible. Of course, this would be a major inconvenience to many UK expats.”

Mr Green said he advises UK expats to review their finances with a cross-border financial expert.

He said: “They should seek to make their financial strategies ‘no deal Brexit’ proof”.

The comments from the expert have come as the government publishes technical notices on the preparations being done for the prospect of a no-deal Brexit.

However, the Brexit Secretary Dominic Raab has said that he believes a deal is “within our sights”.

He said: “We’re bringing ambition, pragmatism, energy and if, and I expect it will be, and if it is matched, we get a deal.”

The Irish Foreign Minister, Simon Coveney, has said that he believes that the chances of a no-deal Brexit are still very slim.

He said: “I think talk of being able to survive or manage a no-deal Brexit is more a negotiating position than it is reality.

“Nobody benefits from a ‘no-deal’ Brexit and we all have a responsibility to ensure that doesn’t happen.”

The MP for Worcester City Robin Walker has also said he believes that the government will get a “good” Brexit deal.

Mr Walker said to Worcester News: “There will be different views within government and within the party towards the different types of deal.

“Clearly we are working towards a deal and getting the best deal but we also need to make plans in the event that that doesn’t happen.”

One government white paper on Brexit has proposed a rule equivalent after Brexit for financial services which would allow the EU and the UK to have access to each other’s markets.

However, nothing has been agreed yet.

Association of British Insurers director of regulation Hugh Savill said: “Leaving the EU without a deal would cause major inconvenience to millions of pensioners, travellers and drivers.

“We urge the government to agree a deal as a matter of urgency.”

The Bank of America has warned that a no-deal Brexit could cause central banks to sell up to £100 billion of Uk bonds.

Cabinet office minister, David Lidington, has warned that the only alternative to Theresa May’s Chequers plan is a no-deal Brexit.