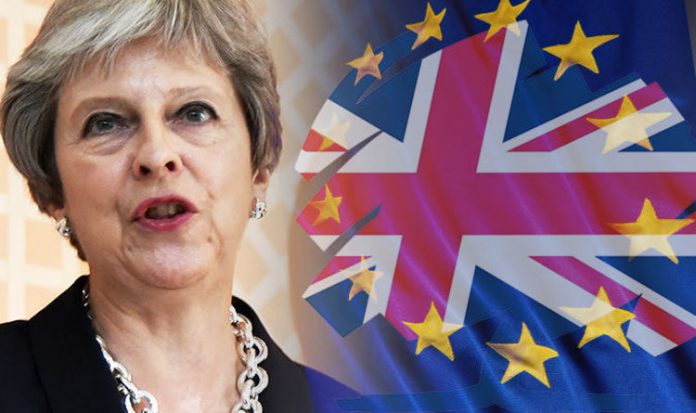 The indecisive stance is likely to raise yet more fears among voters, politicians and businesses around Britain’s future when it exits the bloc on March 29, 2019.

Britain has been in a race against time in its attempts to agree a post-Brexit trade deal with Brussels before an EU summit taking place on October 16.

But negotiations have stalled significantly, with the EU’s chief negotiator Michel Barnier last week admitting that this deadline is being scrapped as just 80 percent of issues have been resolved, following talks with Brexit Secretary Dominic Raab.

Last week, the Government published advice on how people and businesses can plan for a no-deal Brexit following the breakdown in talks with Brussels.

This has led to increased fears that a deal will not be agreed at all before the UK leaves the EU in seven months’ time.

In an interview with Sky News in South Africa, when asked if Britain would be worse off without a Brexit deal, Theresa May said: “What the Government is working for is to ensure that whatever the outcome of the negotiations, we make a success of leaving the European Union.”

Pressed further on whether the UK would be more powerful when it leaves the European Union in March 2019, she would only say: “I think there are huge opportunities for the United Kingdom outside the European Union.

“If you just look at the trade issue: we do want a good trading relationship with the EU once we’ve left, but we also will have the opportunity to negotiate trade deals that are in our interests and in the interests of our bilateral partners, rather than in the interests of the European Union.”

Mrs May also refused to say whether she would vote for Brexit in a new referendum because she doesn’t answer “hypothetical questions”.

Mrs May was however more defiant when asked about a possible leadership challenge from Boris Johnson, insisting: “I am in this for the long term.”

The Prime Minister was taking questions from reporters over the prospect of the former Foreign Secretary challenging her, who’s leadership ambitions have been a constant source of speculation, especially since quitting his post follow the unveiling of Mrs May’s Chequers plan last month.

She said: “I’ve been asked before whether it’s my intention to lead the Conservative Party into the next General Election, I answered that question before – I’m in this for the long term.

“But what I’m also focused on doing is delivering on the domestic agenda which is of concern to people.”

Mrs May was speaking during the first day of a three-day tour of sub-Saharan Africa, where she is setting out her ambition to use the Government’s overseas aid budget to boost Britain’s post-Brexit trade opportunities with fast-growing African nations.

During a speech in Cape Town on Monday, the Prime Minister said she is “unashamed” in aiming to ensure that aid investment in Africa “works for the UK” after Brexit.

She also pledged an investment boost to the continent and announced plans to carry over an EU free trade agreement with six African nations post-Brexit.

Mrs May said: “I am unashamed about the need to ensure that our aid programme works for the UK.

“So today I am committing that our development spending will not only combat extreme poverty but at the same time tackle global challenges and support our own national interest.