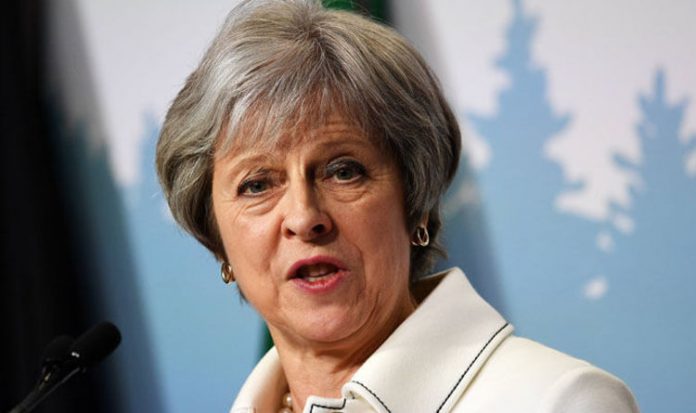 She repeatedly dismissed figures released by Mr Hammond last week stating that no deal would cost the economy 10 percent of GDP compared to staying in the EU over 15 years, and £80billion in tax revenues , as an old “work in progress”.

Mr Hammond – seen as the Cabinet member most strongly pushing to retain close links with the EU instead of helping to secure a decisive break from Brussels – incensed Brexiteer Tories last Thursday by re-releasing gloomy Treasury forecasts about the impact of no deal.

It overshadowed that day’s publication by Brexit Secretary Dominic Raab of papers designed to reassure the country that preparations for no deal were well in hand to ensure UK businesses and services will keep operating if Britain leaves the EU next March 29 not having struck a deal with Brussels.

Asked for her response to Mr Hammond’s intervention, Mrs May said: “As I understand it the Chancellor was talking about a set of figures that when they came out in January I commented  that they were work in progress at that particular time.

“Look at what the director of the World Trade Organisation [Roberto Acevedo , last week, on Today programme] has said, about a no deal situation, that it would not be a walk in the park but it wouldn’t be the end of the world.

Pressed twice more on  the Treasury’s figures and whether they could yet change, she again described them as “a work in progress at the time … in January “.

“What is important is that the Government sits down and negotiates with Europe in relation to the deal that we believe will be good for both sides but at the same time recognising that as we don’t yet know what the outcome of these negotiations will be , that it’s right we make these preparations for a no deal.”

Mrs May spoke to journalists on board the Government’s official Voyager aeroplane as she flew overnight out of the UK with a business delegation for a three-day, three-country visit to Africa to pave the way for stronger trade links after Brexit.

“But of course it is also absolutely right that as a government we make preparations for all potential outcomes.”

She added: “I’ve said right from the beginning that no deal is better than a bad deal. I think it is absolutely right that the government putting the preparations in place for no deal, because we don’t know what the outcome of this will be.”

She appeared not to accept suggestions including recently from Cabinet Office Minister David Lidington that the government now believes it has until the end of the year to finalise a deal with the EU, not October when there is a summit of Eu leaders and which has been cited  by EU negotiator Michel Barnier consistently as a deadline.

Mrs May said : “We are all working to the October deadline. We recognise there is a timetable. We are going to be leaving the EU on 29 March 2019.”

Noting that the Government would have legislation to get through Parliament before Brexit day, she said October was also the deadline the EU itself had originally mooted.

“What we’re doing is the sensible thing which is sitting down and getting on with the negotiations.

“We’re still working on ensuring we can get that good deal, and  in the timetable that enables us to leave on 29 March 2019 with that deal.”

After latest signs of the EU rejecting the Chequers Deal she agreed with ministers last month, including French President Emmanuel Macron saying this week that the EU project was more important than giving the UK a good deal , she said Britain was working through her blueprint with the EU and individual leaders to show it was possible and would be good for both sides.

Asked if she would make more concessions shd again insisted her chequers deal was good for the UK and the EU.

She warned Tory MPs campaigning for a second referendum: “The Government’s position is very clear.

“Parliament overwhelmingly voted to give the British people their say on whether we should remain in the EU.

“They voted, and they voted to leave the EU. I believe it’s now important for the Government to deliver on that vote and that’s exactly what we’re doing.”