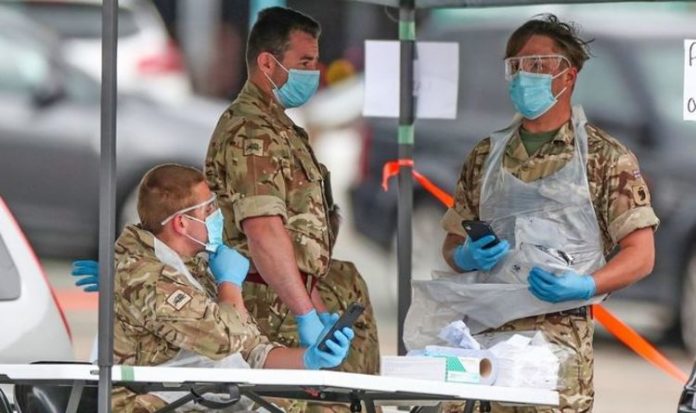 The Prime minister has set a target of one million coronavirus tests a day by the end of the year and is believed to have called on the army to help ensure it is reached. His determination to press ahead with mass testing could see more than five million people in England taking a 30-minute saliva test each week.

The tests are designed to detect if people have virus particles in their system and will be offered to people whether they have coronavirus symptoms. Results will be ready within half an hour.

Redcar in Cleveland will be among the first town’s to take part in a pilot scheme which will see tests offered to 36,000 people will be offered tests.

He said: “This is a voluntary scheme that will better identify who has COVID in our community, help them to self-isolate, and therefore reduce the spread.

“Mass testing is the quickest way we will see restrictions reduced and so I think it is a good thing for Redcar.”

A Department of Health and Social Care spokesperson said: “To build the biggest testing system per head of population of all the major countries in Europe as rapidly as we have done, the skills and expertise of both public and private sector partners were required.

“The number of people directly employed by the civil service and working on NHS Test and Trace is increasing and it’s thanks to the work of many partners that we now have over 500 testing sites across the UK, five major laboratories processing hundreds of thousands of tests every single day.

“We are already piloting new testing technologies in North West, North East and Yorkshire with repeat testing for priority groups to identify those most at risk of spreading the virus.

“We continue to work tirelessly to make sure everyone who needs a test can get one and this includes introducing new, highly reliable technology to allow us to test more people and deliver rapid results at scale.”

A number of versions of the saliva test are understood to have passed Government standards, although experts warned they were unlikely to meet the sensitivity of the standard PCR tests used in the test-and-trace system.

Critics also worry that expansion of saliva-based testing could lead to many thousands of false positives, and Test and Trace boss Baroness Dido Harding has expressed her scepticism of them.

Government testing data suggests that the saliva tests can identify up to 96 percent of positive results.