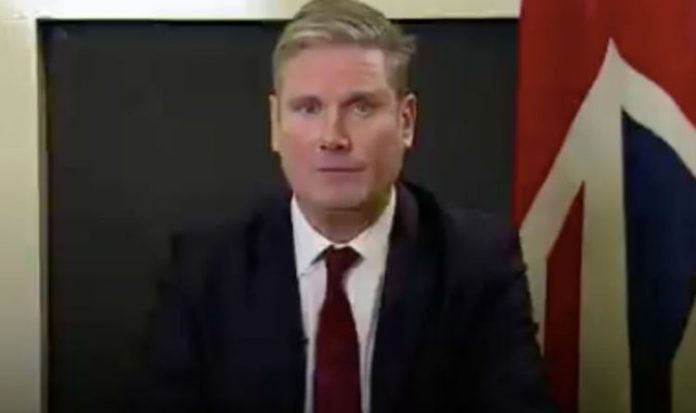 The Labour Party was thrown into turmoil after a leaked memo outlining how the outfit planned to win back Red Wall voters sent shivers through its membership. Sir Keir Starmer has sought to turn Labour into the “national party” following four years of leadership under “unpatriotic” Jeremy Corbyn. In speeches, the Labour leader has sprinkled buzzwords like “history, values and identity” to push the party’s newfound national pride.

The party lost swathes of working class seats in 2019’s general election – the Red Wall – to Prime Minister Boris Johnson’s Conservatives, many turning blue for the first time in their history.

Now, an internal strategy presentation commissioned by the party has stated that Labour must make “use of the [union] flag, veterans [and] dressing smartly” in order to win back disillusioned voters.

Seen by The Guardian, it talked of how Labour has a new term for Red Wall seats, now calling them “foundation seats”, in what could be seen as the party’s increasing desperation to regain lost ground.

Despite the momentous push, Robert Tombs, the renowned British historian, said Labour faced an impossible task as Mr Johnson’s approval ratings soared and his Government got a grip on Britain’s coronavirus epidemic.

Keir Starmer: The Labour leader will not be able to win back Leave voters, Express.co.uk was told (Image: Twitter/@Keir_Starmer)

He told Express.co.uk: “Whether Labour wins back those Red Wall voters very largely depends on how successful the Johnson government is in keeping those voters.

Union Jack: Starmer has in recent months increased the use of the Union Jack in his speeches (Image: Twitter/@Keir_Starmer)

The leaked presentation proves that Labour is intent on playing identity politics, it has been noted.

Among the top recommendations on winning back working class voters is: “The use of the flag, veterans, dressing smartly at the war memorial etc give voters a sense of authentic values alignment.”

A senior Labour official told The Guardian that the language came from the brand agency Republic’s language rather than the party’s.

Yet it has left many Labour staffers concerned.

The publication quoted one source as saying: “I was just sitting there replaying in my mind the storming of the Capitol [in Washington last month] and thinking: are you really so blind to what happens when you start pandering to the language and concerns of the right?”

Clive Lewis, a prominent Corbynite who dropped out of the party’s leadership race early on, and who served as a soldier in Afghanistan, said: “The Tory party has absorbed Ukip and now Labour appears to be absorbing the language and symbols of the Tory party.

“It’s not patriotism; it’s Fatherland-ism. There’s a better way to build social cohesion than moving down the track of the nativist right.”

Red Wall: Seats like Bishop Auckland in Durham turned blue for the first time in their history (Image: Google Maps)

The push to reclaim a British identity could risk adding fuel to an already vicious fire following the fallout between Sir Keir and Mr Corbyn, the latter of whom still holds considerable influence over the party, some backbenchers, the trade unions, as well as a chunk of the country’s membership.

And while many have pushed-back at the details of the presentation, others claim that there is no way for Labour to be serious about challenging the Tories in 2024 unless it convinces working class voters to choose red once again.

Paul Embery, a leading trade unionist and Labour member, told Express.co.uk that there was “no route back to power for Labour that does not pass through those Red Wall seats”.

He explained: “Many of these communities, these Labour Red Wall seats, placed their faith in the Tories for the first time and they want payback.

“It took a lot for many of them to vote Tory, it went against everything they stood for – there were stories of people having their grandfather whispering in their ear when they were in the polling booth.

“But having done it once I think they’ll do it again if the Tories deliver, and if the Prime Minister is seen to be tangibly improving the lives of those communities, investing in them, bringing back jobs, really industrialising, regenerating them, then I think people may well vote for the Tories again and that’s Labour’s real danger.

“The truth is that there’s no route back to power for Labour that does not pass through those Red Wall seats and win them back.

“And that has got to be the guiding mission for the Labour Party.”

Paul Embery: The trade unionist said the Red Wall offered the only route back to power for Labour (Image: Youtube/@TheGuardian)

Sir Keir also has the Scottish question to deal with, as First Minister Nicola Sturgeon pushes for a second independence referendum, perhaps as soon as May.

Labour has a lot to lose should north of the border become independent, as Steven Fielding, Professor of Political History at the University of Nottingham told Express.co.uk: “If he doesn’t win in terms of persuading the Scots that this is a viable alternative to independence, Scotland’s going to be independent within a few years.

“That hurts the Labour Party.”

Responding to a request from The Guardian, a Labour Party spokesperson explained Republic’s presentation consisted of conclusions reached by a third party rather than Labour officials, and said: “This is a report by an external organisation from September 2020.

“It deals with pre-existing perceptions of the party. Keir [Starmer] and Angela [Rayner, deputy leader] have been very clear that Labour has a mountain to climb to win in 2024 but is on the right path.”