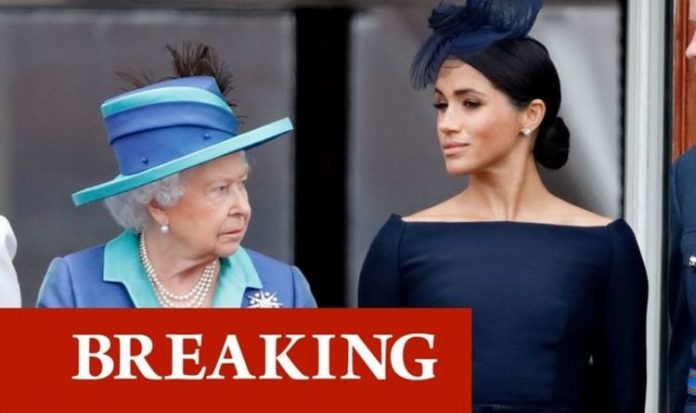 These have been returned to the Queen and will then be “redistributed among working members of The Royal Family”. The Duke and Duchess have insisted they will continue to “live a life of service” despite the decision.

However, Meghan and Harry will continue to hold a number of patronages which they were not given by the monarch.

The decision by Meghan and Prince Harry was taken following discussions between the Sussexes’ and senior Royal Family members.

In a statement, Buckingham Palace said: “The Duke and Duchess of Sussex have confirmed to Her Majesty The Queen that they will not be returning as working members of The Royal Family.

The Duke and Duchess of Sussex have lost their royal patronages (Image: GETTY)

Meghan and Harry stepped down as senior royals in March 2020 (Image: GETTY)

Meghan and Harry insist they will continue supporting charitable endeavours despite the move.

In response, they commented: “We can all live a life of service. Service is universal.”

Meghan will remain patron of Smart Works and Mayhew, an animal rescue charity, as these were arranged privately.

Similarly, Harry will continue to be a patron for the Invictus Games, a charity he set up to help wounded service personnel.

He also remains a founding patron of WellChild, a UK children’s charity, and Sentebale.

‘Oprah deal was too much’ Queen left ‘enormously upset’ and ‘fed up’ [SHOCK]
‘Have to make a living!’ BBC hits out at Harry and Meghan condemnation [REVEAL]
Piers Morgan asks Meghan Markle and Prince Harry to give up titles [INSIGHT]

Harry and Meghan at the 2017 Invictus Games in Toronto (Image: GETTY)

The Duke of Sussex has lost his position as Rugby Football League patron (Image: GETTY)

The Prince founded Sentebale along with Prince Seeiso in 2006 to support children in Lesotho, Botswana and Malawi.

As a result of the announcement, Harry has been stripped of a number of honorary military appointments.

These include his role as Captain-General of the Royal Marines, Honorary Air Commandant of RAF Honington and Commodore-in-Chief, Small Ships and Diving, Naval Command.

Meghan has been stripped of the royal patronages of the National Theatre and Association of Commonwealth Universities.

The Duke and Duchess had served as president and vice-president respectively of the Queen’s Commonwealth Trust, but have now lost these positions.

In a statement, the National Theatre expressed gratitude to Meghan for the help she had provided.

It said: “The Duchess championed our work with communities and young people across the UK, and our mission to make theatre accessible to all.

Harry is no longer patron of the Rugby Football League (Image: GETTY)

“As Buckingham Palace have stated, the process of appointing a new patron is ongoing and will be announced in due course.”

On Twitter, the Rugby Football Union commented: “Prince Harry will be stepping down from his role as RFU Patron.

“We would like to thank Prince Harry for his time and commitment to the RFU both in his position as Patron and Vice Patron.

“The RFU has greatly valued his contribution to promoting and supporting the game.”