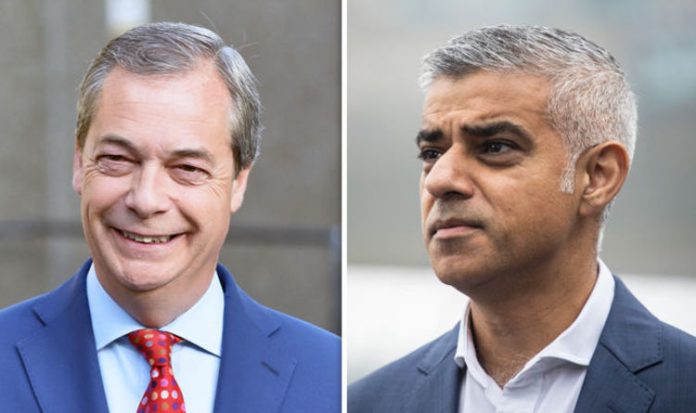 The former Ukip leader, who lives in Bromley, south-east London, last night said he was thinking about running in the 2020 mayoral election.

Outspoken Brexiteer Mr Farage said such a move would be an opportunity to “make arguments” on a high-profile platform.

He believes he has enough support in the capital to beat whichever candidate the Conservatives put forward.

This would throw up the prospect of a head-to-head battle between Mr Farage and Labour’s Mr Khan, a staunch Remainer.

Nigel Farage is currently a member of the European Parliament but will lose his seat when Britain leaves the EU next March.

He told the Financial Times: “I have been encouraged to stand by a group of people, but that doesn’t mean I’m going to.

“I haven’t said no to it, I’m thinking about it.

“The Tory party are very actively aware that if I did stand, they would probably come third, and they are afraid of that.”

Around 1.3 million Londoners voted to leave the EU in the 2016 referendum, while 2.3 million backed Remain.

Next month the Conservatives will pick their candidate to stand against Mr Khan in the 2020 election.

And an ally of the ex-Ukip leader said: “The three Tory candidates are so poor, no one expects any of them to win.

“If you have televised hustings it would just come down to Nigel versus Sadiq.”

Speaking in March, the MEP hit out at the mayor over alarming statistics showing London’s murder rate had surpassed New York’s.

He suggested Mr Khan should focus on tackling crime instead of wading into debates over US leader Donald Trump.

He said: “I’d never thought I’d see the day where the murder rate in London would overtake that of New York.

“I wonder whether Sadiq Khan should spend a bit less time slagging off Donald Trump and a bit more time getting to grips with crime in London.

“Clearly we have a really bad problem.”