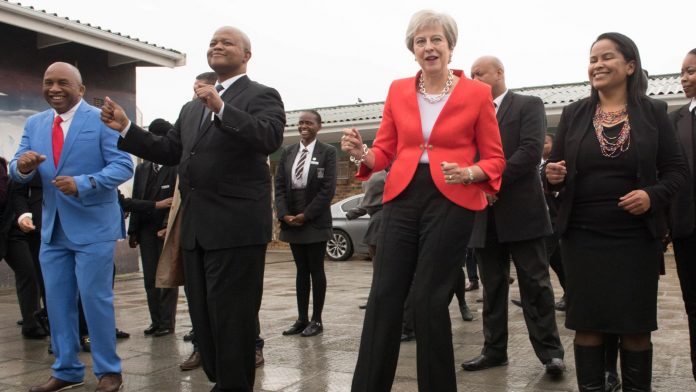 Theresa May has previously said Abba gets her “up and going”, and the prime minister showcased some of her moves on the opening day of her trip to Africa.

She was greeted by a group of dancing pupils during a visit to a school in South Africa, moving from side to side and bobbing up and down in response.

The PM smiled and laughed throughout, later joining in with a second dance during her time at ID Mkize School in Cape Town.

Speaking at a packed school assembly, she told the children: “Can I thank all those young people who were involved in the performance outside who welcomed me.”

Mrs May used her school visit to announce the expansion of the Chevening scholarship, with it being opened up 100 more of “Africa’s brightest young people”.

The PM said: “What I see before me in this hall today is the future of South Africa.”

She added: “I’d like to think that some of you, when you get older, if you’re thinking of going to university that you might think of coming to one of our great universities in the UK.

“We’ve got a programme, it’s called the Chevening scholarship, which helps people to do that and I’m pleased to say today we’re announcing that we’re going to open up scholarships to 100 more of Africa’s brightest young people.”

The Chevening scholarship is an international scheme funded by the Foreign and Commonwealth Office which enables students from 144 countries to study in the UK.