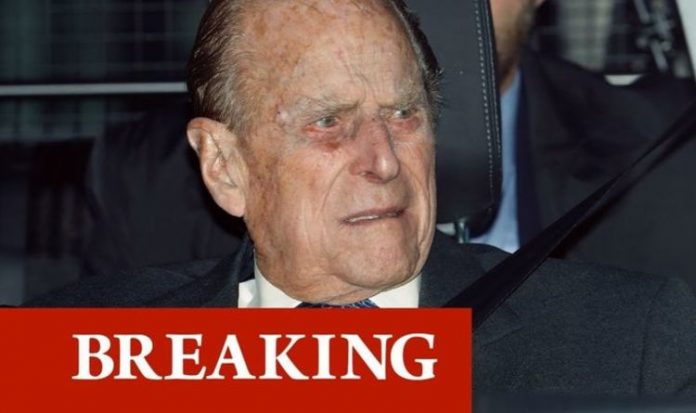 Camilla opened up on the health state of her father-in-law during a visit to the Community Vaccination Centre at St Paul’s Church in Croydon. After thanking volunteers for supporting the rollout of the vaccine against coronavirus, the Duchess sadly revealed Prince Philip is at times in pain as the treatment “hurts at moments”.

The Duke of Edinburgh was first admitted to King Edward VII Hospital in London on February 16 after “feeling unwell”, Buckingham Palace said at the time.

This hospitalisation, palace source stressed, was not an emergency admission and followed an “abundance of precaution” by his doctor.

Last week, Buckingham Palace issued a new statement in which they added the Duke was suffering from an infection and was expected to remain in hospital for a few more days.

On Monday, the palace provided a new update after Prince Philip was transferred to an NHS Trust with a cardiac centre famous around Europe.

The statement said: “The Duke of Edinburgh was today transferred from King Edward VII’s Hospital to St Bartholomew’s Hospital where doctors will continue to treat him for an infection, as well as undertake testing and observation for a pre-existing heart condition.

Prince Philip has been visited only by Prince Charles since he was admitted to hospital, and given the safety measures in place he is unlikely to receive anyone else for the foreseeable future.

Last week, Prince William also gave an update about his grandfather during a face-to-face visit.

During his first engagement outside of Anmer Hall of 2021, William said his grandfather was “ok” and doctors were “keeping an eye on him”.

Prince Edward, the Queen and Prince Philip’s youngest son, also provided a positive update days before the Duke’s transfer to a different hospital.

He told Sky News: “As far as I’m aware, well I did speak to him the other day, so he’s a lot better thank you very much indeed, and he’s looking forward to getting out, which is the most positive thing.

Appearing on Global News’ The Morning Show, she said: “I think there is increasing unease because, as of today, he has been in hospital for two weeks.

“This is a man who is notoriously private about his health, but clearly the fact that he has been in hospital this long does not speak well.”

Prince Philip has suffered a series of health issued over the past decade.

In 2011, the Duke was rushed to hospital after suffering from chest pain and underwent surgery for a blocked coronary artery at Papworth Hospital.

In 2012 he was forced to miss part of the Diamond Jubilee celebrations as he was hospitalised for a bladder infection.

In June 2013, Prince Philip was operated at the abdomen and remained in hospital for 11 days.

The Duke, who is turning 100 in June, was last hospitalised in December 2019, when he was taken to King Edward VII Hospital for treatment and observation for a pre-existing condition.

While Prince Philip is in hospital, his husband of 73 years remains at Windsor Castle, where she carries out her day-to-day royal engagements.

Yesterday, Buckingham Palace reaveled the Queen spoke to Chancellor Rishi Sunak over the phone ahead of today’s Budget statement.

Remit and recommendations for the Financial Policy Committee: Budget 2021