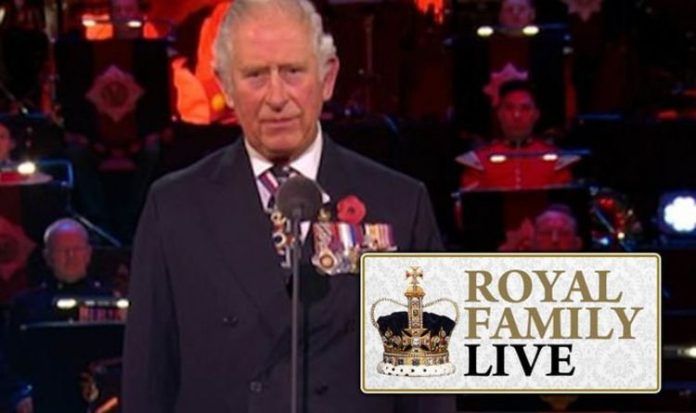 Prince Charles took the centre stage at a pre-recorded, socially-distanced Festival of Remembrance. In accordance with Government guidelines on coronavirus, the yearly event took place in the eerily empty Royal Albert Hall last night with no one to fill the 5,500 seats usually occupied by veterans, politicians and the Royal Family.

The Queen usually attends this cherished event, sitting in the royal box alongside with senior members of her family.

In his heartfelt speech, the future King drew a parallel between wartime and the ongoing coronavirus pandemic, saying the current crisis has “afforded us a keener perspective” on the 75th anniversary of the end of World War 2.

He continued: “Through all this, just as in wartime, the very best of our country has been on conspicuous display.

“We have reaffirmed our faith in each other and in our communities, and seen afresh that service to others underpins our society.

Prince Charles spoke of the debt of gratitude the country has for veterans and the fallen (Image: PA/BBC)

Prince Charles delivered a poignant speech at the Festival of Remembrance (Image: PA)

“We have been reminded that heroes and heroines are all around us and take many forms.

“In this challenging year, we have perhaps come to realise that the freedoms for which they fought are more precious than we knew, and that the debt we owe them is even greater than we imagined.”

After paying tribute to the armed forces who continue to support NHS staff and key workers in their effort to tackle the pandemic, Prince Charles looked back to veterans and the wartime generation.

He said: “We have seen, too, how much the wartime generation continues to teach us.

READ MORE: Why does the Queen wear five poppies for Remembrance Day?

Members of the public could not attend this year’s Festival of Remembrance in person (Image: PA)

“The actions of veterans, Captain Sir Tom Moore and Private Joseph Hammond, or of Margaret Payne, and many others like them, offer a shining example of selfless commitment, and of how even those in their later years can achieve so much good by placing others ahead of themselves.

“Their example continues to guide our servicemen and women today.

“Throughout this pandemic, our armed forces have stood side by side with our medical professionals, key workers and emergency services in the fight against coronavirus, whilst maintaining the defence of our nation at home and abroad.”

The Queen paid tribute to the Unknown Soldier (Image: PA)

The Festival of Remembrance, organised by the Royal British Legion to honour the memory of servicemen and servicewomen who have fallen, hosted tributes to WWII veterans and the families of those who have died in the line of duty.

Among those featured, there was heroic fundraiser Sir Captain Tom Moore.

Speaking about his decision to raise money for the NHS by walking 100 laps in his daughter’s yard before turning 100 himself, Sir Tom said: “I’ve enjoyed every minute of it because I felt that we were doing some good, and the very fact that so many kind people were contributing money to the service, which was so important.”

The Queen was seen wearing a face covering in public for the first time yesterday (Image: PA)

8.10am update: Sir Captain Tom Moore speaks of his meeting with the Queen

During the Festival of Remembrance, the veteran and fundraiser spoke about his meeting with the Queen on July 17, when he was knighted.

Sir Tom said meeting the Queen in the Quadrangle at her castle in Berkshire was the highlight of his year.

The 100-year-old veteran then praised the monarch, saying: “She never ever looked on the black side, and she was such a great person for our country.

“And at the moment she is still showing a positive look to all things that are going on.”