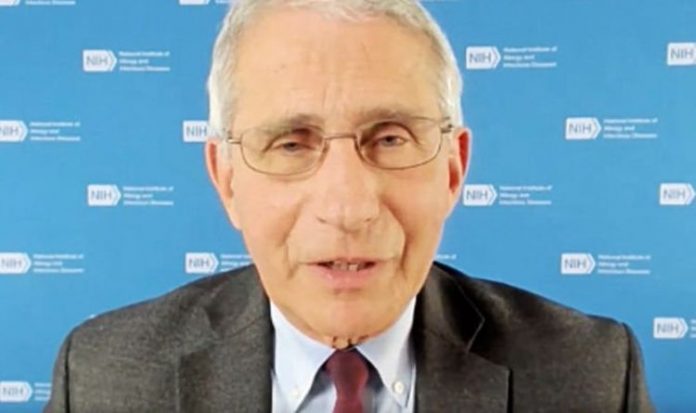 Dr Fauci had accused the UK medicines watchdog of rushing through its approval of the Pfizer/BioNTech vaccine and warned the speed at which it gave the green light could undermine confidence in the jab. But he has now backed down and insisted his comments were not a “judgement on the way the UK did it”.

He said: “Our process is one that takes more time than it takes in the UK. And that’s just the reality.

“I did not mean to imply any sloppiness even though it came out that way.

“I do have great faith in both the scientific community and the regulatory community in the UK.

“I have a great deal of confidence in what the UK does both scientifically and from a regulator standpoint.”

Britain became the first country in the world to approve the Pfizer vaccine on Wednesday.

An MHRA spokesman said: “We have rigorously assessed the data in the shortest time possible, without compromising the thoroughness of our review.

“COVID-19 vaccines, including this one, are being developed in a coordinated way that allows some stages of this process to happen in parallel to condense the time needed, but it does not mean steps and the expected standards of safety, quality and effectiveness have been bypassed.”

He said a rolling review of the vaccine data started at the beginning of October and the agency had made good progress on the review before the last submission of data was received.

The spokesman said: “Any vaccine must undergo robust clinical trials in line with international standards, with oversight provided by the Medicines and Healthcare products Regulatory Agency.

“No vaccine would be authorised for supply in the UK unless the expected standards of safety, quality and efficacy are met.”

Dr Fauci, head of the US National Institute of Allergy and Infectious Diseases, sparked outrage when he said the UK did not review the vaccine “as carefully” as US health regulators.

He said: “Britain kind of ran around the corner of the marathon and joined it in the last mile. They really rushed through that approval.

“The United States of America Food and Drug Administration is the gold standard of regulation. They are doing it in a careful way, appropriately.

“When we did a survey here in the US, there was a considerable degree of scepticism and reluctance to get vaccinated and we were concerned that if we did anything that looked like it was cutting corners that would feed into the scepticism.”

The European regulator EMA has also criticised the approval of the vaccine using emergency powers, insisting that its own, slower approach is more appropriate.

Education Secretary Gavin Williamson declared the UK is getting a coronavirus vaccine first because it is a “much better country” than France, Belgium and the US.