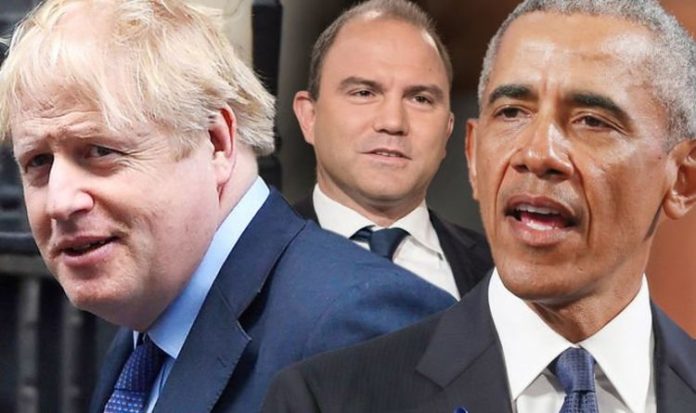 Mr Rhodes, whose bestselling memoir and role in a fly-on-the-wall documentary have made him one of Washington’s most prominent foreign policy analysts, does not seem to be a huge fan of the Prime Minister. According to a recent report by The Times, he has in the past said that any form of Brexit “would have a number of s****y consequences”, adding: “The national identity of the UK is playing out before our eyes. What is this country? “It was the British empire for a very long time. And then it was the Cold War beachhead for liberal democracy and open markets. And then it was this unique bridge between the Americans and the Europeans and the Commonwealth.

“Really what they’re deciding is: who are we? Are we a European country or not? Are we embracing the legacy of the empire or are we moving past that? Are we an isolated island unto ourselves or are we connected to the rest of the world?”

He also described Mr Johnson, at the time a backbench critic of Theresa May’s Brexit deal, as “the guy who wants to Make Britain Great Again”, believing that “the empire was great and if only we could go back”.

READ  How many bubbles can you have? | UK | News (Reports)

The Prime Minister’s year in office and coronavirus have not improved Mr Rhodes’s view of his qualities.

Mr Rhodes, who served as President Obama’s deputy national security adviser, wrote in a tweet last month: “It is no coincidence that countries run by right-wing nationalists are handling COVID-19 the worst.”

He then listed the US, Russia, Brazil and the UK.

Two years ago, Mr Rhodes also revealed he and President Obama had tried to meddle with the Brexit referendum.

In April 2016, Mr Obama visited London and warned Britain that a trade deal with the US would not be a priority if UK voters chose to leave the EU.

Mr Obama said: “The UK is going to be in the back of the queue.”

At the time, his remarks were furiously rejected by Brexiteers, who suspected David Cameron’s Government to be the mastermind behind them.

JUST IN: Brexit fishing bonanza: Why Britain should not fear WTO

They pointed to the President’s choice of the word “queue”, rather than the American usage of “line”, as evidence of British involvement in scripting Mr Obama’s comment.

He told BBC Radio 5 Live’s Anne Foster: “We had come here to try to help the Remain campaign and we had a meeting with David Cameron and his team.

“We were all in violent agreement about the negative consequences of Brexit.”

Referring to the meeting before the press conference the two leaders held together, Mr Rhodes said: “Cameron and his team were going through the Brexit arguments.

“Some of the arguments were based on the notion the US could just negotiate its own free trade agreement with the UK quickly.

“We all were agreeing that was unlikely to happen.

“As Obama was saying that, somebody on the British side said ‘yes, we’d end up being back of the queue’ and everyone laughed and Obama said ‘that’s exactly right’.

“Then he was asked ‘well, it would be good if you could repeat that point in the press conference’ and, of course, he did.”

However, he explained: “To be fair to Cameron, I don’t know that Cameron was suggesting the exact phrase that had been used on his side.

“But that’s what had been put forward and Obama said ‘of course, I’m here to be helpful’.”

He added: “Subsequently, it was correct. It was not true that you could skip to the front of the line.

“But, ‘queue’ is not exactly the word that Obama uses in casual conversation.”

He wrote: “Claims that President Obama was told to say ‘back of the queue’ on a post-Brexit trade deal are incorrect.

“As I said at the time, the President was clear in his own mind and spoke for himself. We were surprised when he used the phrase.”