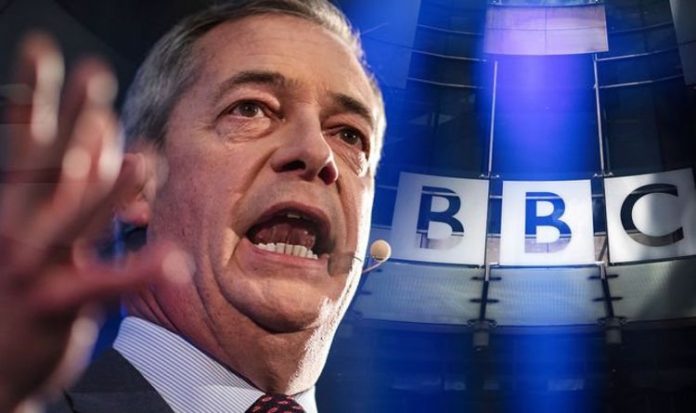 The Brexit Party leader, who is a vocal critic of the BBC, has criticised the corporation for earmarking £140million of 2020’s budget to collect TV licence fees and chase viewers who do not pay. Mr Farage said the money would be better off spent on pensioners, who recently lost their exemption to pay the annual levy.

Mr Farage told Express.co.uk: “It is absolutely scandalous that the BBC is forking out so much money instead of focusing on pensioners.”

His comments come after this website revealed the total cost of gathering the £157.50 fee will increase by around £38million this year.

The huge rise is accounted for by the extra cost of implementing plans to scrap free licences for the over-75s.

The Brexiteer isn’t the only one to question the huge sum spent on enforcement.

Dennis Reed, director of Silver Voices, said: “It is a disgrace.

“Whether it is £100million or £40million, that is a lot of money which could be spent providing free licences for vulnerable over-75s.

“It is a false economy – fool’s logic.

“Instead of using it to provide a service to deserving people, they are paying informers to go round harassing them.”

JUST IN: Outrage as BBC to fork out £140m of cash on chasing TV licence fees

An additional £42.7million is being spent on other collection costs, including communications, postage for reminders to non-payers and licence fee modernisation.

Figures for the last five years reveal that the corporation usually spends about two-thirds of its annual fee collection bill to Capita.

It is not the first time Mr Farage has been vocal about the BBC this week, as he recently slammed the corporation for being “hopelessly out of touch”.

Mr Farage took to Twitter to celebrate the news that the lyrics of Rule Britannia and Land of Hope and Glory will now be sung during the Last Night of the Proms, after it announced the pieces would be orchestral only.

The Brexiteer wrote on Twitter: “This just shows the power of public pressure and how hopelessly out of touch the BBC are with their own licence fee payers.”