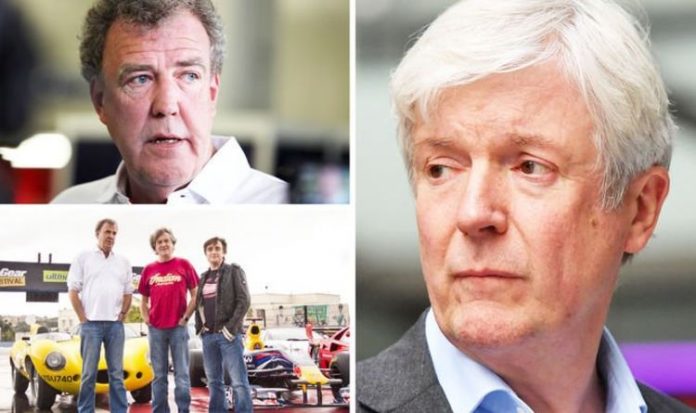 Lord Hall, 69, reflected on his seven-year stint at the helm of the BBC during a recent interview after he stepped down as Director General. He recounted difficult exchanges with TV talent during his reign and the dire need to force presenters to accept pay cuts to keep the institution alive. One of the most troublesome decisions was to let go of motor journalist Jeremy Clarkson after an explosive row.

The 60-year-old motor enthusiast was dropped from ‘Top Gear’ after an “unprovoked physical attack” with BBC executive Danny Cohen in 2015.

At the time, Lord Hall maintained that he had “not taken the decision lightly” and recognised it would be a divisive move.

The decision not to renew Clarkson’s contract also led his TV colleagues James May and Richard Hammond to leave the popular programme.

The trio went on to launch ‘The Grand Tour’ on Amazon Prime, meanwhile ‘Top Gear’ has struggled to redefine itself since – now presented by Andrew Flintoff, Paddy McGuinness and Chris Harris.

Last week, Lord Hall revealed his candid thoughts on the affair and the savage response from viewers – which forced him to need police protection.

He lamented the loss on the Media Show podcast: “I like Jeremy a lot, I think he is actually a real talent and that was a very hard decision and he was a very special sort of person in the BBC.

Lord Hall revealed that he ‘broke the news” to Clarkson personally and had met with him “on a number of occasions” to discuss the incident.

He said that they “had met since” and he was “a big fan” before he added: “I’m sorry he left because he was a particular voice that the BBC needed – but you can’t accept that kind of thing.”

His predecessor Mark Thompson once described the ITV ‘Who Wants to be a Millionaire?’ as a “pungent, transgressive, slightly out of control talent that the BBC could not afford to lose”.

But Lord Hall stuck to his decision and claimed he had no other choice due to claims of “bullying and harassment” that had besmirched the institution’s name at the time.

He continued: “People felt strongly that some people got away with it and others didn’t.

“You simply couldn’t let Jeremy get away with it, because that would have said to everybody there is a culture for one set of people and a culture for the rest.

“The easy one would have been to say ‘OK reprimand and move on’ but you can’t do it in that case sadly because again I think he’s a real talent.”

During that time, he revealed the backlash from the public had been extremely difficult to deal with – as Media Show host Amol Rajan described: “It got pretty dicey!”

Lord Hall continued: “Yes it did, I got a death threat against myself and my family and we had to move out of our home for a few days and have some protection.”

When asked if he regretted the decision after that incident, he said: “No. [I’m] absolute firm, it was the right decision to make, which I say with regret because I’m a fan.”

Rajan joked that Clarkson likely did not regret the decision as he had been “financially well-ensconced” by Amazon Prime.

Lord Hall tried to interject that ‘Top Gear’ was “doing extremely well” and recently “found its feet” only for the host to mock “not in the ratings”.