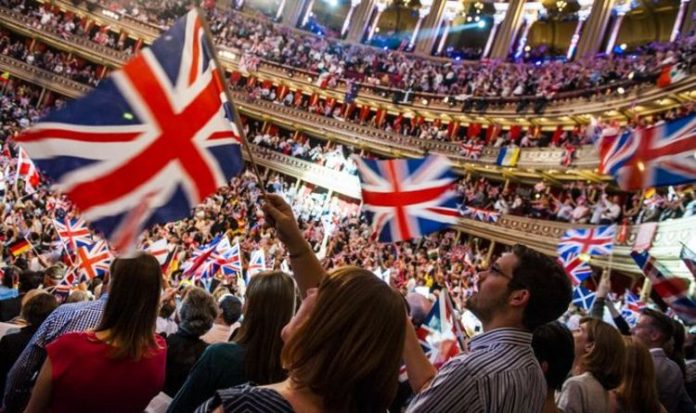 Dame Vera Lynn’s version of the traditional anthem is currently number one and number two in the chart. It comes after a campaign on Twitter by outspoken actor Laurence Fox in response to the BBC’s announcement Land of Hope and Glory and Rule Britannia would not be sung at the Last Night of the Prom.

The actor urged followers to help propel the British song to number one, saying: “Would the @BBC then have to play it? What a beautiful day that would be.”

When it reached the top spot, he tweeted: “Absolutely amazing! Number 1. What a brilliant day! The people have spoken @BBC.”

Former Brexit Party MEP Martin Daubney added: “Getting Land Of Hope & Glory to No1&2 might seem like a small victory.

“But it isn’t. It’s a totemic & symbolic backlash.

“And hats off to @LozzaFox for rallying the troops.”

Brexiteer Emily Hewertson wrote: “How can the British Broadcasting Company be so out of touch with Britain?

“Common sense has prevailed. I love this country.”

READ MORE: Nigel Farage calls for BBC to be SCRAPPED after Proms controversy

The row over Land of Hope and Glory and Rule Britannia was sparked by reports the two songs could be dropped from Last Night of the Proms due to their perceived association with colonialism and slavery.

But the BBC fuelled the controversy when the broadcaster confirmed the traditional favourites would be performed but without the lyrics.

Prime Minister Boris Johnson intervened and insisted it is time we “stopped our cringing embarrassment about our history”.

He said yesterday: “I just want to say, if it is correct, which I cannot believe that it really is, but if it is correct, that the BBC is saying that they will not sing the words of Land Of Hope And Glory or Rule, Britannia! as they traditionally do at the end of The Last Night of the Proms…

“I think it’s time we stopped our cringing embarrassment about our history, about our traditions, and about our culture, and we stopped this general bout of self-recrimination and wetness.

“I wanted to get that off my chest.”

And Business Secretary Alok Sharma suggested the BBC use subtitles so viewers can sing along at home.

He told Times Radio: “Personally, I would like to see the lyrics sung and of course it is always possible to put lyrics up as subtitles on the screen so if people want to they can join in at home.”

There will be no audience at the concert at London’s Royal Albert Hall on September 12 because of coronavirus restrictions.

Members of the audience usually sing along and enthusiastically wave flags when Rule Britannia and Land of Hope and Glory play.

BBC director-general Lord Hall said he backed the decision to ditch the lyrics this year.

The BBC has confirmed the patriotic anthems, which are hugely popular, will be sung at next year’s Last Night of the Proms.