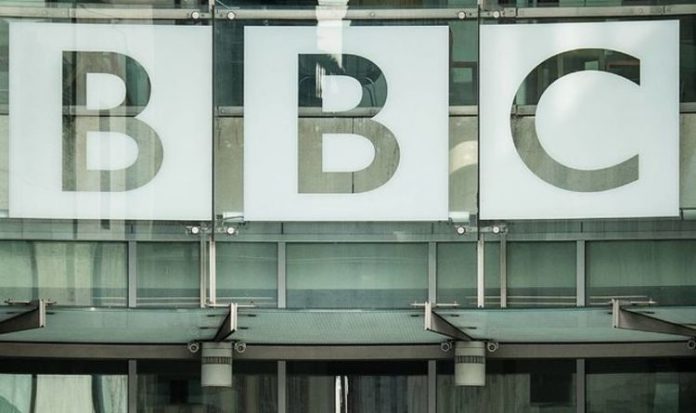 The broadcasting corporation’s annual report shows the Department of Culture was asked to double the BBC’s borrowing limits from £1.05billion to £2.2billion during 2018 to 2019. The report added the drop in funding for free television licences for people aged over 75 had resulted in a £67million loss this year. TV licence sales also plummeted after 237,000 households stopped paying the £157.50 yearly fee.

“This reduction is partly due to the decline in funding for free licences for over-75s.”

Rebecca Ryan, campaign director at Defund the BBC, blasted the corporation for giving presenters including Zoe Ball a pay rise of nearly £1million this year while also asking for help with funding.

She called on the broadcaster to “stand on their own two feet” and stop relying on taxpayers’ money.

The BBC has come under fire for demanding extra funding (Image: GETTY)

She told Express.co.uk: “It seems a strange way to run a business where on the one hand, you are in debt and asking the Government for permission to increase your borrowing, and yet on the other hand you are handing out million pound pay-rises to failing presenters and committing multi-millions towards harassing the over-75’s to force them to cough up for a TV licence that many do not even want.

“Obviously, we have seen from the figures in the annual report that 250,000 people cancelled their licence last year, and we know from our own supporters that there are many thousands more who have cancelled since those figures or who are planning to do so in the near future.

“Tapping up the government for tax payer money because licence fee payers have rejected you, whilst splashing £100 million on ‘diversity’ and millions more on prosecuting the vulnerable, is an outrage.

“Surely this is just confirmation that the BBC need to think long and hard about their funding model and start to stand on their own two feet commercially.”

The BBC said the extra funding will be spent on leases (Image: GETTY)

The annual report added the extra funding would be spent on leases, as a new international accounting standard (IFRS 16) requires the BBC to debit leases as costs and liabilities.

However, it is not clear what the leases are being used for.

The report said: “Our borrowing limits, set by the Department for Digital, Culture, Media and Sport (DCMS), were increased from April 1, 2019, due to mandatory accounting changes resulting in additional leases reported on the balance sheet.

“The Public Service net borrowing limit was increased to £2.2million, of which £2million is specifically for leases.

DON’T MISS
TV Licence: The warning signs as a new scam tries to defraud Britons [REVEALED]
BBC in crisis as Charles Moore ‘out to destroy the corporation’ [INSIGHT]
BBC ‘dangerously close to the brink’ as broadcaster endures crisis [WARNING]

“The BBC Commercial Group borrowing limit increased to £500million, of which £150million is specifically for leases.”

The BBC has come under fire for paying huge figures to its top presenters at a time when the company is also trying to find extra funding lost due to coronavirus damage.

However, new director general Tim Davie said he could get rid of top paid stars if they break impartiality rules with their outspoken views on social media.

He said: “I’m prepared to take the appropriate disciplinary action – all the way to termination.”

Mr Davie also warned switching to a civil system for the licence fee would cost the broadcaster more than £200million a year.

His comments came amid proposals to decriminalise the non-payment of the licence fee.

Mr Davie said it was “a bit early for us to make assumptions about what the Government will or won’t do”.

He said the BBC’s position was “crystal clear on this”, adding that “this system is logically hard to beat”.

Gary Linekar is one of the BBC’s top paid stars (Image: GETTY)

Speaking at the Digital, Culture, Media and Sport (DCMS) select committee, he said: “If you are a law-abiding, paying customer and licence fee payer, what I am trying to do is get you the most value for money, and the decriminalisation proposal, frankly in my mind, just doesn’t pass the logic test.”

Mr Davie added the BBC cannot be “complacent” about its future and must “renew” its commitment to impartiality.

A BBC spokesperson told Express.co.uk: “In common with all businesses, the BBC has implemented mandatory accounting changes that result in additional leases being reported on the balance sheet from 1 April 2019.

“The DCMS increased the Public Service net borrowing limit to £2,200 million in order to accommodate this, of which £2,000 million is specifically for leases.”