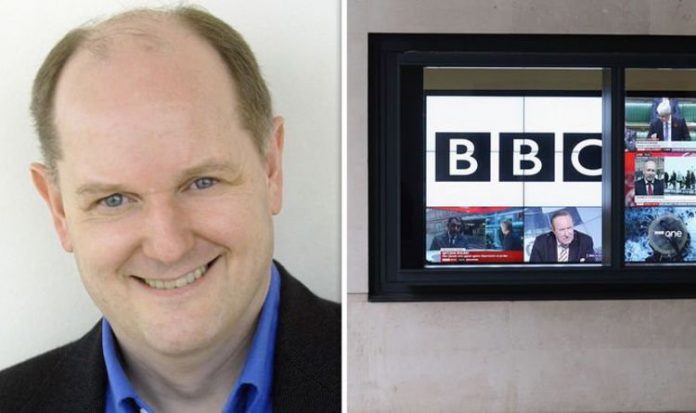 Mr Mosey made the incendiary confession whilst speaking at the Edinburgh TV Festival, held as a replacement for the usual physical event due to COVID-19. He also claimed the comedy show W1A, which portrays the BBC as riven with bureaucracy and political correctness, contains “a lot of truth”.

He later became its head of sport and managed coverage of the 2012 London Olympic games.

During his address Mr Mosey said: “I feel passionately, there should be more people from ethnic minority backgrounds in newsrooms, making decisions, and diversity is something the industry has to commit itself to.

“The only thing I’d add really is I it’s also about diversity of thought.

“It’s about Left and Right, it’s about liberal and conservative.

“And if you think about the missing voices last year…they also included people in the red wall, people who voted for Brexit, people who were from working class areas in the north of England…and pretty much every major decision in television is still taken in London.

“Part of that diversity is getting the sense of a whole UK with this amazing canopy of people in it and getting newsrooms to be more representative of everybody in the UK, rather than what it used to be really which was white liberals in London.”

In his speech he argued the BBC’s lack of ideological diversity in part reflects its focus on London.

He commented: “I do think geography is a really key part of it. It’s all very well having Salford, and everywhere else, but I really think decisions should be made there.

“I know you’ve got Five Live and Breakfast [based in Salford] but every single powerful BBC executive is still in London, ditto ITV and Channel 4, although they’ve got Leeds, it still feels very London.

“I think breaking down these kinds of barriers should have happened.”

According to Mr Mosey the BBC struggled with pro-Brexit voices (Image: GETTY)

The comedy, which stars Hugh Bonneville and Jessica Hynes as BBC executives, satirises the corporation for its fixation on political correctness.

During his talk Mr Mosey admitted this can reflect how the corporation operates in reality.

He said: “The W1A sitcom is a parody of course, but it does have an awful lot of truth in it about the way the organisation, the BBC, works and its kind of mindset and breaking that down.”

The BBC is currently receiving criticism after deciding ‘Rule Britannia’ and ‘Land of Hope and Glory’ won’t be sung at this year’s Last Night of the Proms due to their alleged links to racism.

Both songs will still be played but it will be instrument only.

Boris Johnson hit out at the BBC saying he “cannot believe” the decision.

He added: “I think it’s time we stopped our cringing embarrassment about our history.”

In a statement the BBC said: “For the avoidance of any doubt, these songs will be sung next year.