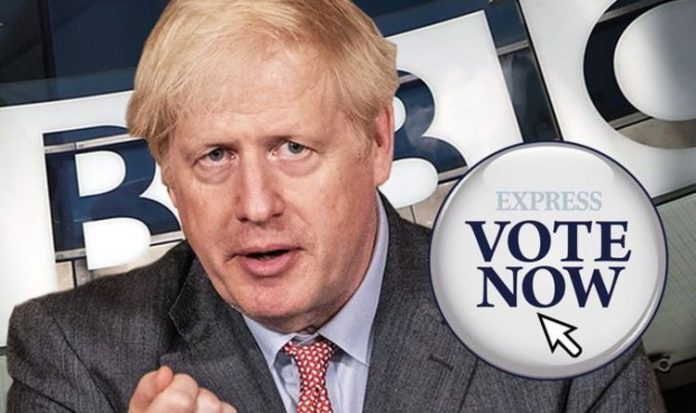 This year, the BBC has faced ongoing criticism after they scrapped free licences to most over-75s, fuelling calls for the corporation to be defunded. Ministers are expected to wait for a new chairman to be installed before deciding whether to go ahead with the decriminalisation plan.

But amid growing pressure in No10 following the resignation of BBC critic Dominic Cummings, Express.co.uk is asking, “Should Boris scrap the licence fee?”

Three million households have now been forced to pay £157.50 for a colour licence and £57 for a black and white licence.

Despite calls for the BBC to be defunded or move to a subscription-based service like Netflix, bosses are resisting plans to decriminalise non-payment of the fee.

New BBC director general Tim Davie recently said: “If you are a law-abiding, paying customer and licence fee payer, what I am trying to do is get you the most value for money.

READ MORE: Get a move on Boris! BBC TV licence fee plan pushed back by PM

“With Dom it’s ideological – he believes the licence fee should be scrapped.

“With the PM, it’s more reform than revolution.”

Mr Cummings’ resignation came just days after another of Mr Johnson’s senior aides, Lee Cain, announced he will be stepping down as director of communications.

Both Mr Cummings’ and Mr Cains’ resignations come at a crucial time where the Government is facing big decisions over the future of post-Brexit trade with the EU.

Negotiations with the EU are currently ongoing with both sides holding crucial talks to agree a deal before the end of the transition period.

However, despite pressure mounting for Mr Johnson, others have claimed Mr Cummings’ departure gives the Prime Minister chance to “pivot back”.

One senior MP told the Guardian: “Boris must take this chance to pivot back to being the liberal unifier, sack a chunk of these cabinet no-hopers and start a new team, but it does look like tonight that Carrie and those urging a more inclusive Boris are winning.”

But some are concerned the departure of the Vote Leave team would mean to Conservatives would no longer prioritise the levelling up agenda and civil service reform championed by the Prime Minister over the last 12 months.