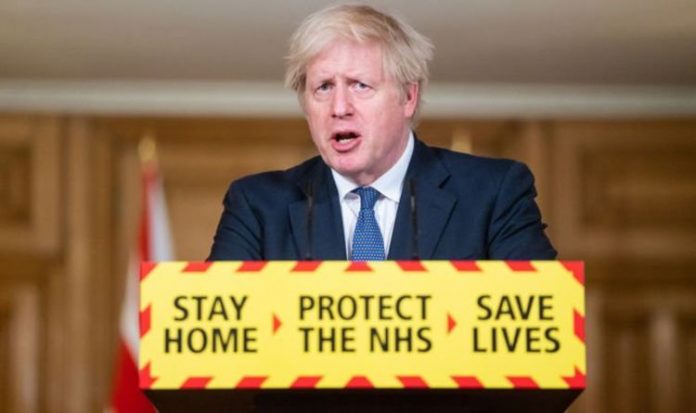 Prime Minister Boris Johnson has been providing regular updates about the UK’s fight against coronavirus from Number 10 Downing Street throughout the pandemic. With England more than three weeks into its third lockdown, today the PM is due to address the nation with an urgent plea to adhere to lockdown rules as cases mount.

On Thursday a further 1,290 further deaths were reported and there had been a further 37,892 lab-confirmed cases of coronavirus in the UK, bringing the total number to 3,543,646.

Just less than five million people have now received their first dose of the coronavirus vaccine, but ministers have called on the nation to “play their part” and stick to lockdown conditions.

Environment Secretary George Eustice told Sky News: “We need everybody to play their part, to abide by the restrictions we have got in place to limit the spread of this virus.

“And, yes, that does mean we have to intervene, sometimes in quite a draconian way and issue penalties, and we make no apology for doing that because you can see the impacts of this virus spreading.”

The penalty will come into force next week and will double after each offence up to a maximum of £6,400 for repeat offenders.

The fines currently stand at £200, and the £10,000 penalties for unlawful groups of more than 30 people will still only apply to the organiser.

“Not only to those in attendance but to our wonderful police officers who attend these events to shut them down.

“As this latest measure demonstrates, we will not stand by while a small number of individuals put others at risk.”

He is expected to ask Brits not to flout lockdown rules.

The official said: “This has been a very bleak week and we need everybody to keep sticking to the rules and helping to protect hospitals, which are under the most tremendous pressure.

“We aren’t yet seeing the sharp fall in infections that we had last April and May and we need to keep going.”

This comes as everyone in England who tests positive for Covid-19 could be given £500 as part of plans ministers are said to be considering to boost quarantine compliance.

The proposal is said to be the “preferred position” of the Department of Health and Social Care (DHSC), according to a leaked sensitive document seen by The Guardian.

The overhaul has been prompted by Government polling indicating only 17 percent of people with symptoms are coming forward for testing, while just one-in-four comply with rules to self-isolate for 10 days after testing positive and 15% continue to go to work as normal.

The DHSC said it would not comment on a leaked paper but did not deny blanket self-isolation payouts had been discussed.