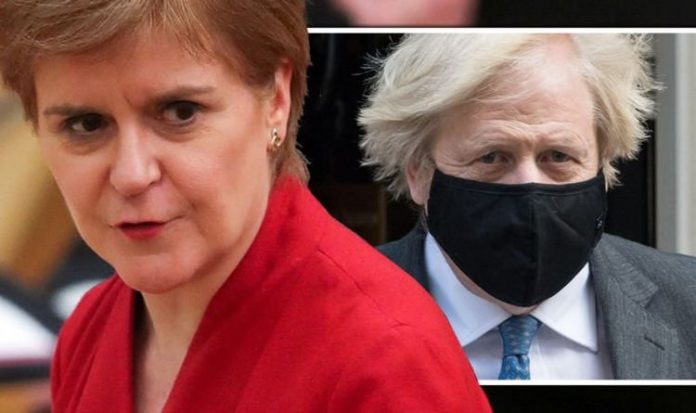 Scottish First Minister Nicola Sturgeon has said she will hold an advisory referendum on independence if her Scottish National Party (SNP) wins a majority in May’s Holyrood elections, regardless of what Prime Minister Boris Johnson thinks about. Her party has set out an 11-point roadmap for taking forward another vote, which was presented to members of the SNP’s national assembly last month. The SNP leader told the BBC’s Andrew Marr: “I want to have a legal referendum, that’s what I’m going to seek the authority of the Scottish people for in May and if they give me that authority that’s what I intend to do: to have a legal referendum to give people the right to choose.

The SNP leader’s comments came as a four-nation polling for the Sunday Times found that a majority of voters in Scotland and Northern Ireland want referendums on the breakup of Britain.

READ  Upholding the UN Convention on the Law of the Sea

As a stand-off between the Prime Minister and Ms Sturgeon now seems inevitable, in an exclusive interview with Express.co.uk, constitutional historian Vernon Bogdanor suggested Mr Johnson could rule out Scottish independence forever by highlighting the SNP’s domestic failures with their current devolved powers.

He said: “First of all, the Scots are not handling the devolved powers they have got very well – education and health.

“The whole constitutional argument is detracting attention from the poor outcome in education and health in Scotland, which is much worse than the rest of the country.

“They haven’t adopted the reforms of both New Labour and the Conservatives.

“For example, great diversity of schools and in the health service, the introduction of some private provisions.

READ  Change of Her Majesty’s Ambassador to Mexico: Jon Benjamin

“Figures from the Programme for International Student Assessment [PISA] show that numeracy and literacy are in general decline. I think in Maths, Scotland might be behind Slovenia.”

Prof Bogdanor further explained that the independence issue could be put to bed once and for all, if Westminster issues grants in the right way.

He continued: “The Government could give specific grants to improve literacy and numeracy.

“This is something the SNP could not reject.”

Moreover, Prof Bogdanor claimed that to pay for free university tuitions, the SNP had to cut college places.

He added: “This could result in a skills shortage and it would not just be a problem for Scotland but for the whole United Kingdom.

“We mustn’t do what we did in Northern Ireland which is devolve and forget.

“There is a strong case for the Government to give Scotland specific grants for further education, which again cannot be rejected by the SNP.”

“We don’t have a big economy, we would have problems almost like Greece, in terms of public deficit.

“Is it really in their interest to have another Greece?”

Dr Jaworski noted that Ms Sturgeon should find something to make Scotland more attractive in the eyes of Brussels.

He added: “The First Minister is trying… with talks about electricity and power.

“But do we have it now? Can we sell it? Who is going to invest in this?

“We don’t even have money to invest in the buses…”

The annual government expenditure and revenue Scotland report (GERS) found Scotland’s fiscal deficit for 2019-20 was 8.6 percent of GDP, up from 7.4 percent the previous year.