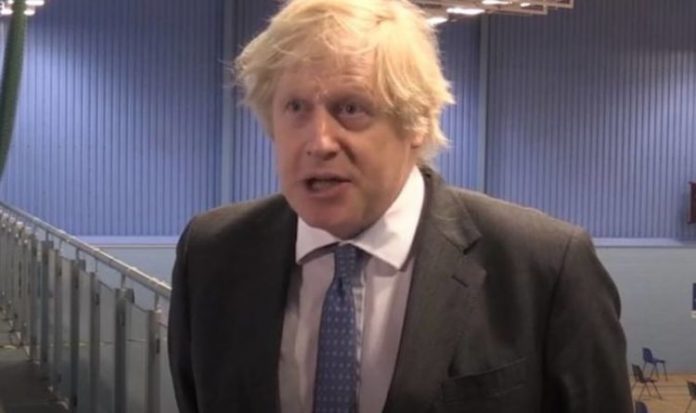 Boris Johnson visited a vaccination centre in Cwmbran, South Wales and was asked questions about the easing of lockdown and Wales’s vaccination programme. Mr Johnson was also asked whether he believed devolution was a “disaster”, echoing comments he reportedly made about Scotland, to which the politician responded saying “certainly not overall” after a bit of fumbling. The answer appeared to be a slight dig at Nicola Sturgeon as it was reported the PM allegedly called devolution “Tony Blair’s biggest mistake” during a Zoom meeting with MPs.

During his visit, Mr Johnson was asked: “Strengthening the Union has been a key priority of yours, and devolution is at the heart of this now, has devolution been a disaster?”

He replied: “I think that it’s great to be here in Wales and to see the speed with which the vaccination programme is happening.

“And your question about the Union, I think that a lot of people looking at the way the NHS across our whole country has performed, the way the armed services, which you can see here to today, have been so valuable.

“The way the drugs have been procured nationally, I think people can see the strength of the Union.”

But the Prime Minister was asked again if he thought devolution was a disaster to which he replied: “Certainly not overall”.

He added: “I speak as the proud beneficiary of devolution, when was running London I was very proud to be doing things that made a real difference for my constituents and for my electorate.

“Improving the quality of life, making sure that we drove down crime, that we did everything we could to give it advantages to young kids and that was what I did.”

It was reported by newspaper that Boris Johnson said devolution north of the border was a “disaster” while speaking to MPs in a meeting.

Nicola Sturgeon has threatened to hold another independence referendum without the approval of Westminster after May 6.

The move is in response to new polls which suggest there is majority support for independence in Scotland.

The PM has been recommended by Lord Dunlop to appoint a minister responsible for maintaining Union internal relations to tackle independence calls.