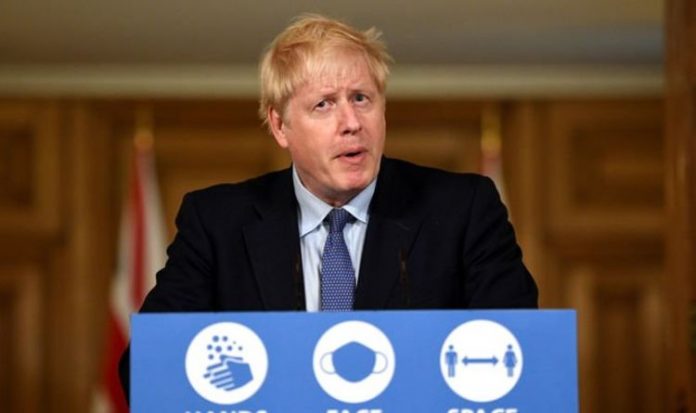 Prime Minister Boris Johnson has spoken to the nation from Downing Street this afternoon, following days of intense discussions with Greater Manchester leaders on the next stage in lockdown. The PM confirmed Manchester would be moving into Tier 3. Mayor of Greater Manchester Andy Burnham accused the Government of walking away from talks today, after disagreements on funding should Manchester enter Tier 3 lockdown.

The three tiers had been introduced last week, and leaders in Greater Manchester have been pushing back against entering the strictest Tier 3 measures without additional funding.

Speaking in Manchester today Mr Burnham said the Government “walked away” from negotiations and said local leaders were not offered enough to protect people through the “punishing” winter ahead.

Speaking to reporters, he said civic leaders were prepared to reduce their bid for financial support to £65 million – a figure he described as the “bare minimum to prevent a winter of real hardship”.

As Mr Johnson addressed the nation, he revealed Manchester would be entering Tier 3 regardless of Mr Burnham’s concerns. The PM said Greater Manchester will move to the “very high” coronavirus alert level.

Read More: Lockdown POLL: As Ireland shuts down, should Boris do the same?

1. Greater Manchester to enter Tier 3 – but no agreement has been reached

The Prime Minister confirmed Manchester will enter Tier 3 but said an agreement with the local council has not been reached.

The restrictions will be put in place from midnight on Friday.

He said: “We made a generous and extensive offer to support Manchester’s business, the mayor didn’t accept this. Given the public health risk I must now proceed [with stricter measures].”

The PM said Greater Manchester would receive £22 million in support, a stark difference from the £55 million which had been on the table in discussions earlier today

The Prime Minister said: “Despite the failure to reach an agreement I hope the mayor and council leaders in Greater Manchester will now work with us to implement these measures.”

Mr Johnson, in response to a question about visiting relatives, has said the Government is reviewing circumstances in which people can visit elderly relatives in care homes.

He said: “We do have to prevent the spread of the virus in care homes; you’ll remember what happened in the early part of the year, so we have had to take some steps to protect elderly residents from the possibility of infection by visitors.

“But we are certainly looking at what we can do to review the circumstances that might allow people to visit their elderly relatives in extreme circumstances and on compassionate grounds.”

“But the unfortunate and horrible truth about this virus is that when it gets into care homes it can inflict really massive mortality very quickly.”

On testing in care homes, he said: “I’m hoping that some of the pilots, with rapid and novel testing methods, will eventually lead to a breakthrough so that we can be more relaxed about visiting residents and our families in care homes in a much safer way. For now, it is a very difficult situation.”

The deputy chief medical officer for England, Professor Jonathan Van-Tam, has said coronavirus cases are rising among the over-60s, putting pressure on the NHS.

At the Downing Street news conference he said “heat maps” showing the spread of the disease showed “very significant areas of heat” across all ages in Greater Manchester.

He said: ”The infections that have seeded in the younger age groups are now penetrating the older age groups.

“This is most concerning because it is the penetration of the disease into the older age groups that gives the NHS significant problems.”

Mr Johnson was asked by a member of the public how many areas would have to be in Tier 3 before a national lockdown is implemented.

He responded: “What we are trying to avoid is a national lockdown at all.

“We don’t rule anything out but the difficulty is that the distribution of the virus this time round is very uneven by comparison with March and April.

“And so the right response is, as many other countries are doing, to go to this local and regional approach.”

5. Other areas which could enter Tier 3

Mr Johnson confirmed conversations are ongoing with leaders in South Yorkshire, West Yorkshire, Nottinghamshire and the North East about the possibility of moving to the very high alert level.

He said: “I hope and expect central and local government will continue to work closely together.

“Ultimately all of us want to protect the NHS and in doing so to save lives.”