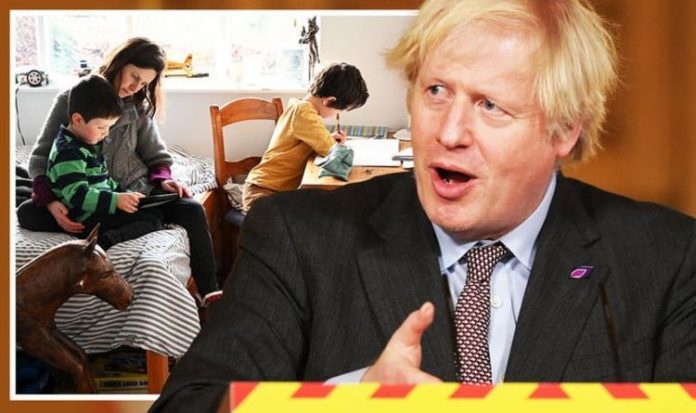 The Prime Minister acknowledged the “immense sacrifice” made by youngsters who lives have been upended by “a virus which, in truth, seldom poses a lethal threat to them”. Praising this newspaper for raising the plight of Generation Lockdown he said: “I am determined that their prospects should not be damaged by everything they have been through. “They have shouldered this burden willingly and with great resilience – and they deserve the thanks of the nation.” He was speaking after 17-year old Lucy Thorne, an A-level student from Dorset, wrote an open letter to him – published in today’s paper – explaining how hard life was for today’s youth.

“We are mature enough to understand what is happening to the country and have virtually no ability to partake in something that will affect the rest of our lives,” writes Lucy. “Please listen to us!”

The PM’s pledge to children, teenagers and young adults comes as 18 Conservative MPs demanded that schools be open in England on February 22, in line with Scotland.

Mr Johnson has promised to “get young people back into education as soon as prudence and caution allow”.

His words follow a poll for the Sunday Express showing that 71 per cent back the Sunday Express Generation Lockdown campaign for children, teenagers and young adults to receive financial, educational and mental and physical health support for the long term to undo the harmful effects of lockdown.

The Redfield and Wilton poll also showed that 55 per cent do not think enough has been done for Generation Lockdown so far.

In his piece for the Sunday Express, the Prime Minister highlighted measures already announced to help young people.

Boris Johnson has promised to get young people back into education as soon as caution allows (Image: UK )

These include an extra £300 million of catch-up money for every level of education, from early years to schools and colleges, on top of the £1 billion announced last year.

He has also appointed Sir Kevan Collins as Education Recovery Commissioner to take charge of our long term plan to ensure that pupils have the chance to make up their learning over the course of this Parliament.

This week Dr Alex George was named as the Youth Mental Health Ambassador to advise the government on this important issue and raise its profile.

Mr Johnson said: “The mental health and wellbeing of young people has of course suffered during the pandemic.

“The compassion and forbearance of the youth of Britain has made us all proud.”

His words come as a Cambridge university study has highlighted the potentially detrimental effects of isolation and social distancing measures on the rapidly developing brains of youngsters.

Separating children from their peers causes the wiring in their brain to fire differently (Image: Getty )

The scientists, who will present their findings later this month at Imperal College Lodnon, say that separating youngsters from their peers and the sense of loneliness causes the wiring in the brain to fire differently – with a neurological response akin to cravings associated with fasting.

They show how these effects could cause lasting behavioural changes as the adolescent becomes more prone to seek self rewarding and potentially self destructive comforts such as alcohol, drug taking or overeating to fill the gap.

Dr Livia Tomova, an expert in neuroscience at the University of Cambridge who co-authored the studies published in the Lancet, Child and Adolescent Health, and Nature Neuroscience, said: “The brain adapts to its environment and for adolescents this development is oriented towards relationships with peers.

“We see this across cultures and across species. To interact with peers is crucial for the development of cognitive abilities and general development.

“The lockdown has superimposed a curfew on this. This is not okay. This is not a healthy way for them to behave.

Children have been socially isolated are they are not having face to face contact with peers (Image: Getty )

Children have been socially isolated and they are not having face to face contact with peers.

“This repeatedly unfulfilled need could lead to compensatory self destructive mechanisms such as overeating or becoming prone to taking drugs.”

She added: “I am very worried that the impact could be lasting. We do not know the answer. Connection to social media may have some mitigating effects but this is a grey area because we also know that certain passive use of social media doesn’t help people feel better but has quite the opposite effect.

“My fear is that there is already lasting damage to some young people who are spending a significant part of their lives apart from each other.”

She described social interactions as “a basic human need, analogous to other human needs such as food consumption or sleep.”

The work has been ongoing since early 2018 and examines the behavioural effects of isolation in volunteers who experience short periods of social isolation followed by MRI brain scans, behavioural tasks and questionnaires.

It also reviewed previous studies on the behavioural impact of isolating prisoners from their peers and animals from peer equivalents.

Professor Sarah-Jayne Blakemore, Professor of Psychology and Cognitive Neuroscience, at the University of Cambridge, who is also helping with the research, said: “There is an urgent need to consider the educational and mental health consequences of children and young people not being in school or seeing their friends. Social experience and social learning are crucial throughout development.”

Simon Shattock, Principal Lecturer at Institute of Family Therapy said: “The government needs to start considering the potentially life long ramifications of school closures in its lockdown policy which has led to a huge increase in mental health problems among youngsters

“We are not looking at the social and psychological impact of this policy. We need to start considering the ramification of this lockdown and school closures on children and mental health. It’s not happening as far as I can see.”

He added: “While certain children may manage better than others this is harmful to normal development and I believe the impact will affect some children for a lifetime.”