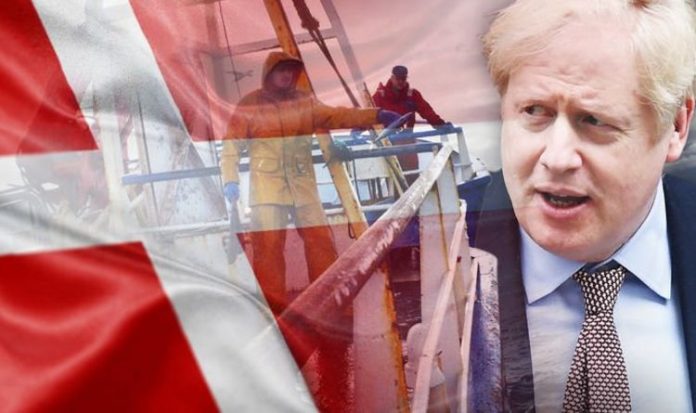 The deadline for the EU and UK to reach a deal – the end of this year – is fast approaching, but Brussels’ chief negotiator Michel Barnier has warned an agreement by then is unlikely as the fisheries row holds up negotiations. He said last month: “The UK is effectively asking for near total exclusion of EU fishing vessels from UK waters. That is simply unacceptable.” He added that the EU was willing to accept that “there may be change to the benefit of UK fishermen” but that it would not be at the price of the “destruction of the EU fishing industry”.

Expert on fisheries, Professor Aaron Hatcher, said in a report that Denmark in particular is vulnerable if a no deal Brexit leaves the EU without UK waters.

He said: “Denmark, for example, would find it impossible to catch its quotas of herring and mackerel if it could no longer fish in UK waters, with devastating consequences for its industry.

“This is why the EU is determined that the current level of access be maintained, and it has stated this quite clearly.”

In his report, Professor Hatcher also warns that UK fishermen could feel let down by the end of the Brexit trade talks.

He argued that Prime Minister Boris Johnson will ultimately prioritise access to European markets, as over 70 percent of fisheries exports goes to the EU.

Professor Hatcher added: “Most of the UK’s high value catch is exported, the great majority to the EU.

“Tariff-free trade in fish with the EU is therefore vital for the UK fishing industry.

“While the industry has continually sought (and been given) reassurances from the Government that access to markets and access to resources will not be linked, in practice they almost certainly will be.”

He added in his paper for the London School of Economics, published in March, that UK fishermen will feel betrayed.

Officials in Copenhagen have mined the archives to build a case that could potentially be fought in the international court of justice in The Hague.

Denmark’s foreign affairs minister, Anders Samuelsen, told The Guardian at the time that the issue was crucial to many communities in Denmark and that they would be making their case through the EU’s chief negotiator, Michel Barnier.

He said: “Danish fishermen have historically been fishing across the North Sea. The Common Fisheries Policy in the EU has regulated this, based on historical rights and preserving our common stocks that don’t follow economic zones.

“Clearly, this is very important for many fishing communities especially along the Jutland coast, and we all put our full support behind the EU’s negotiators to find the best way forward.”