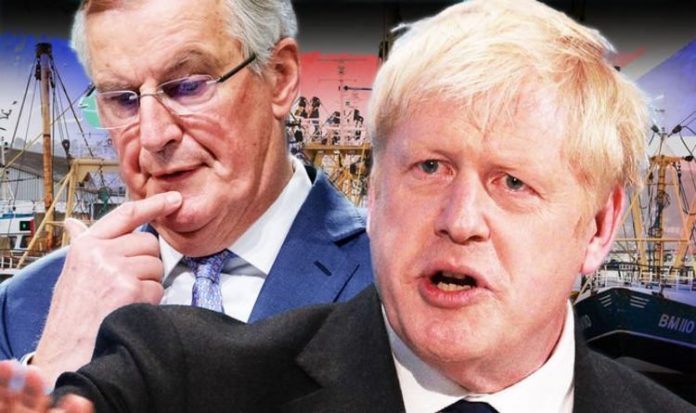 The UK and EU are set for crunch talks on fisheries as the UK hopes to gain sole control of its waters while Brussels looks to keep access to British grounds. French President Emmanuel Macron’s reluctance to make concessions on fish is stirring concern among officials, as they fear he could sink efforts to reach a wider trade deal. EU negotiator Michel Barnier is to meet with German Chancellor Angela Merkel, signalling that the bloc could be internally negotiating concessions that could be granted to the UK. It comes after Britain offered a three-year transition period for European fishing fleets to allow them to prepare for the post-Brexit changes.

The head of the National Federation of Fishermen’s Organisations, Barry Deas, warned the Government last week that fishermen would not accept anything that resembled a “common fisheries policy lite”.

He said ministers had given repeated assurances that fishermen’s interests would be protected, but admitted there remain “concerns and fears” that they could be sacrificed at the last to secure an agreement by Prime Minister Boris Johnson’s October 15 deadline.

Mr Deas added: “What we wouldn’t agree to is surrendering fishing rights in order to have a trade deal.

“There is no expectation within the UK fishing industry that the UK will back down on fisheries. If anything, the commitments that have been made to the industry are stronger now than when the negotiations started.

“We’ve been given clear and unequivocal commitments.”

French President Macron hit back however, saying European vessels will be granted a deal allowing continued access in British waters.

He said: “Some kind of transitional arrangement is one of the things under discussion. The key point for us is the destination. We must have absolute certainty that at the end of this we have access to the full quota shares that we as an independent coastal state have a right to expect.

Hopes of a compromise have improved however, despite Mr Macron’s efforts to stand firm.

The French President promised he would “fight” for his country’s fishermen during Brexit trade talks.