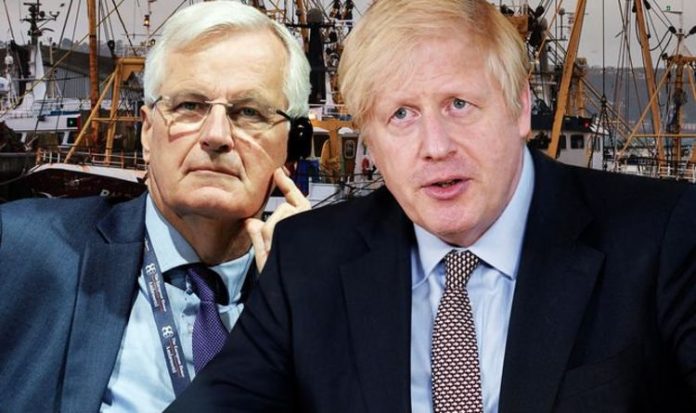 This warning was made by fishermen in France as many prepare for life without the same access to British waters. The EU are refusing to budge on their demands to keep access to British waters after the end of the transition period, as UK chief negotiator David Frost spoke of his frustration last week. He said on Friday: “The EU is still insisting not only that we must accept continuity with EU state aid and fisheries policy, but also that this must be agreed before any further substantive work can be done in any other area of the negotiation, including on legal texts.

With two months to go until the EU-imposed deadline of October, the EU’s chief negotiator Michel Barnier also said he was “disappointed” with the progress made.

Mr Barnier added that “frankly I am disappointed and I am worried“ and “a little surprised” because Boris Johnson had told EU leaders earlier this summer he wanted an outline deal by July.

He continued: “Too often this week it felt as if we were going backwards more than forwards.”

Mr Barnier also said that at this stage an agreement seemed “unlikely” and “I simply do not understand why we are wasting valuable time.”

However, a no deal scenario could have worrying consequences in Europe’s waters.

French fishermen warned last year there would be “naval battles” between French, Belgian and Dutch at sea.

Stephane Pinto, fisherman and vice-president of the fisheries committee, said: “If tomorrow there is no deal Brexit, meaning a hard Brexit, all the flotillas of Europe, the Belgians, the Dutch, and the French will all be in the same fishing zone.

“And in terms of cohabitation that would be difficult. I think there would be a naval battle.”

This statement made by Mr Pinto in an interview with AFP echoed warnings made in a remarkable report.

The document said in full: “Up to 282 EU and European Economic Area nations’ fishing vessels could enter illegally or are already fishing in UK waters: up to 129 vessels in English waters, 100 in Scottish waters, 40 in Welsh waters and 13 in Northern Irish waters on day one.

“This is likely to cause anger and frustration in the UK catching sector, which could lead to clashes between fishing vessels and an increase in non-compliance in the domestic fleet.

“Competing demands on UK government and maritime departmental agencies and their assets could put enforcement and response capabilities at risk, especially in the event of illegal fishing, border violations (smuggling and illegal migration) and any disorder or criminality arising as a result, eg violent disputes or blockloading of ports.”