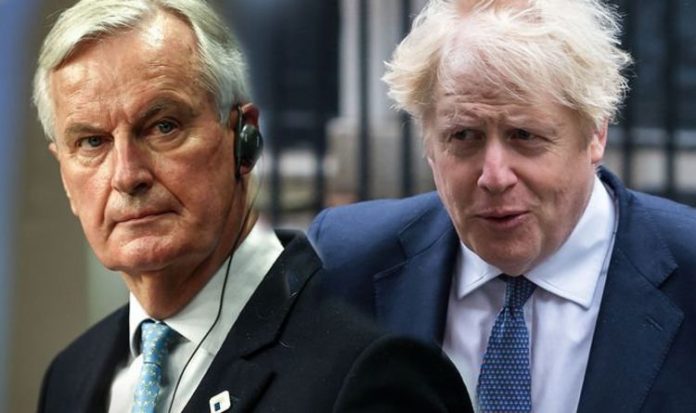 Foreign Secretary Dominic Raab has said the EU and UK are entering “the last week or so” of “substantive” post-Brexit trade negotiations. With the Brexit transition period set to end in little more than a month’s time, Mr Raab suggested talks might soon be reaching their conclusion. However, he called on the EU to accept a “point of principle” on fisheries, an issue he described as having been a “major bone of contention” in reaching a deal.

Face-to-face negotiations on a post-Brexit trade deal between the UK and EU resumed this weekend after the bloc’s chief negotiator, Michel Barnier, and his team were forced to quarantine due to a positive coronavirus test among their number.

Speaking in London on Sunday afternoon, Mr Barnier said the negotiations were an “ongoing process”, adding: “Let us work, let us work.”

Downing Street continues to insist Britain is not afraid of leaving the bloc with no agreement in place if the EU does not negotiate in good faith.

As the clock ticks down and tensions rise, a leaked document sheds light on how Brussels has been conducting the negotiations.

Two years ago, the bloc came up with a clause with the objective to punish Britain if it refused to sign up to new EU laws during the transition period.

Under the plans, Brussels would have stripped the UK of the right to challenge decisions made by EU judges in the European Court of Justice.

If the UK refused, then the European club wanted to hit back by blocking sectors from having access to the single market.

Leader of the House of Commons Jacob Rees-Mogg criticised the plan.

He said: “The UK cannot accept ECJ jurisdiction if the EU itself will not.

“I wonder if such an approach would not violate the EU’s own Charter of Fundamental Rights.”

The plans revealed that the EU was worried Britain might break European law during the transition period.

They feared the UK could lodge an objection to the law with the ECJ and wait out the two years by embarking on a lengthy legal challenge at the Luxembourg-based court.

They believed this would have created a loophole, which would have effectively let Britain dodge new rules and regulations for the transition period.

To stop this happening Brussels wanted to create a way of punishing Britain by denying important and lucrative sectors of the economy access to the single market.

The five-page document, circulated in advance of Mr Barnier”s whistle-stop tour of all the 27 remaining EU countries in 2018, stated: “In addition, the Governance and Dispute Settlement Part of the withdrawal agreement should provide for a mechanism allowing the Union to suspend certain benefits deriving for the United Kingdom from participation in the internal market where it considers that referring the matter to the Court of Justice of the European Union would not bring in appropriate time the necessary remedies.”

Peter Ptassek, Germany’s top Brexit official, tweeted: “Now we are talking transition! Straight forward draft by [the Commission] provides the clarity the economy facing Brexit needs. Not so much time left to get a deal on this in March.”

Despite uproar from Brexiteers, under the EU-UK withdrawal agreement, the UK is still bound by Union law during the transition period.

The Commission is competent to launch an infringement procedure against the country for any failure to fulfil an obligation under the EU.

In September, Brussels did launch legal action against Britain, after MPs passed the Internal Market Bill, which overrides parts of the withdrawal agreement.

The UK plans, defended by Prime Minister Boris Johnson as a safeguard against unreasonable behaviour by Brussels, cover key economic issues such as the application of EU state-aid rules in Northern Ireland and the certification of exports travelling from the region to Great Britain.

In a recent report, Lee Rotherham, the former director of Special Projects at Vote Leave, explored the rationale behind why the UK Government might genuinely feel unsafe in the arrangements as they stood.

He wrote: “So, as we approach an eschatological moment in the Brexit talks, now seems an appropriate moment to consider the declared objectives of the EU negotiators that might generate legitimate concerns.

“Of course, there is the backdrop – the dire track record of the EU itself, from stitching up John Major over his Social Chapter opt out and then David Cameron over his eurozone bailout opt out.

“Then there is the methodology itself, from Michel Barnier demanding the backstop be locked in first before discussing anything else (the Sequencing blackmail scandal – a stance which risked an instant ‘hard border’), to the first draft text listing transition ending at some point before the end of the year ’20XX’.

“But let’s instead simply focus on the cornerstone of the EU’s negotiating mandate, specifically what team Barnier were instructed to get out of the negotiations and how they set about the mission.”

Mr Rotherham argued the problem that clearly arises from the negotiating mandate, published earlier this year, is that it has generated gaps the negotiator is able to interpret, as well as conflictions that he has been able to deploy as an anchor against pursuing free trade options.

For example, the Council notes that “Article 184 of the withdrawal agreement provides that the Union and the United Kingdom are to use their best endeavours, in good faith and in full respect of their respective legal orders, to take the necessary steps to negotiate expeditiously the agreements governing their future relationship referred to in the political declaration and to conduct the relevant procedures for the ratification or conclusion of those agreements, with a view to ensuring that those agreements apply, to the extent possible, as from the end of the transition period”.

How customs might work under Boris’ Brexit deal (Image: EXPRESS.CO.UK)

“This is an acknowledgement that has been signally forgotten over the UK seeking domestic safeguards from the Commission seeking to force EU rules on the internal UK market.

“The second is a clear instruction to get the deal done within the set time frame. Yet two explicit deadlines, over fisheries and the services deal, have signally not been pursued by the Barnier team with the called-for level of energy.”

Moreover, the former Vote Leave strategist claimed that proof of “lack of good will” is contained in paragraph 33.

This states that “the parties should, consistently with Union rules, address issues relating to the return or restitution of unlawfully removed cultural objects to their countries of origin”.

Mr Rotherham added: “It transpired that when the negotiating objectives were being discussed, Greece, reportedly with Italy’s backing, inserted a clause demanding the Elgin Marbles back.

“While clearly negotiating mandates are set to protect national interests, the inclusion of this into a free trade agreement (FTA) when not even covered in the existing EU treaties is absurd, particularly for a country that is particularly engaged in protecting global heritage at risk (this author successfully proposed the policy behind establishing a Cultural Protection Fund in 2016; and the British Museum which houses the Marbles itself is heavily engaged in outreach with counterparts in for example Iraq).”

He concluded for his piece on Briefings for Britain: “The subsequent track record of the EU in twisting the text of signed treaties to get its own way at UK expense is justification enough for the UK to include a safety valve in future UK-EU relations.

“The attempt by Greece to shovel in the issue of the Elgin Marbles should naturally encourage negotiators to review the small print, but it has always been the approach of Barnier that should encourage us be alert as to pitfall clauses in the end text – ever since he was caught on camera stating that he intended to tell UK negotiators ‘brutally, but calmly’ that continued UK payments into the EU were non-negotiable, but that this should not be admitted publicly.

“It is clear from his speeches that the EU’s negotiator has been seeing the talks not so much as an opportunity for safeguarding trade on the EU side, but as a mechanism to manage a threat.

“Perhaps he would have been more engaging had he not been thwarted in his bid to become Commission President.”