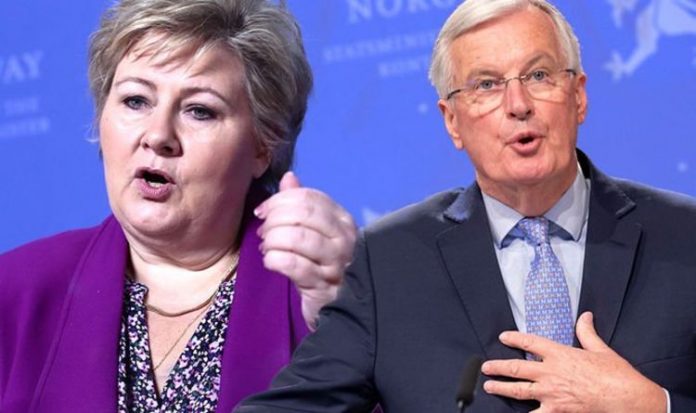 Brexit talks will switch to a virtual format after a member of the EU negotiating team has become infected with coronavirus. Following the announcement, the EU’s chief Brexit negotiator Michel Barnier pulled out of a planned debrief of national ambassadors scheduled for today, and will be replaced by one of his senior staff. A debriefing of members of the European Parliament, also planned for today, has been cancelled.

UK negotiators had been holding talks with the EU team in Brussels since Sunday, with hopes rising that a trade deal could be reached in the coming days.

David Frost, the UK’s chief negotiator, tweeted that he was in “close contact” with Mr Barnier about the situation.

Talks have been focused on the remaining sticking points of rights for the EU fishing fleet in British waters, “level playing field” guarantees for business and the question of how to enforce any deal.

Despite optimism at the start of November, both sides agree there has been little progress on these fundamental blockages and are preparing for a no deal scenario.

As pressure mounts and the clock ticks down, unearthed reports suggest one European country could be pleased if Britain ends up with no agreement.

In 2018, a close ally of German Chancellor Angela Merkel claimed Norwegian MPs had warned the EU that Britain should not be allowed a better Brexit deal than the partnership they have with the bloc.

Brexit fury: Norway warned EU not to give UK ‘better deal than us’ (Image: GETTY)

Elmar Brok, a senior German MEP, said Norwegian MPs were warning Brussels not to give “the same treatment or better than we have” to the UK – particularly if London does not meet the same obligations, such as following EU rules.

Mr Brok told the Telegraph: “At a meeting with the delegation from the Norwegian parliament, they reminded me that we should not give Britain the same advantages as those given to member states of the EU.

“Norway pays for the cohesion policies of the European Union, and Switzerland does too.

“They said this to us – and the Norwegian Prime Minister said this a few weeks ago – they warned us and said, do not give the same privileges, same treatment, or even better than we have, because we fulfil the obligations.

“So there’s a borderline we have to accept.”

Norway is not an EU member state but pays millions into the European budget each year and follows EU regulations – without having a say in their drafting – in exchange for market access.

At the time, a Norwegian government spokesman strongly denied the suggestion that it would oppose a UK-EU deal that was superior to Norway’s arrangements.

The spokesman said: “We have repeatedly denied this as falsehood.

“On the contrary: It is of direct interest to Norway that the EU and the UK succeed in negotiating an orderly UK withdrawal from the EU and a framework for their future relationship.”

The spokesman added that Norwegian MPs’ views, as expressed in the meeting with Mr Brok, did not reflect government policy.

The news came after Norwegian officials had already reportedly warned the EU against making an overly generous offer to former Prime Minister Theresa May.

Earlier that year, an EU official claimed that Norway was following the Brexit process “very closely” to make sure that “the EU was not giving the UK a much more favourable deal”.

Norway is part of the European Economic Area (EEA) and pays more into the European budget per capita than the UK.

In a 2018 report, Jonas Helseth, a Norwegian ex-EU adviser, explained why Britain could never accept such a model post-Brexit.

Mr Helseth, who is now the director of Bellona Europa, an international environmental NGO, wrote: “Firstly, what might seem comfortable enough for Norway would hardly prove so for Britain.

“Norway does indeed have access to the EU single market without full EU membership, but that comes at a democratic cost.

“In fact, it is an illusion: I would call it membership without a vote. Even Norway’s own EU minister admitted as much.

“Ironically, non-member Norway is among the countries most efficient in adopting EU directives – in most cases without debate.

“So why is there so little outrage? Again not without irony, it seems that although Norway twice rejected EU membership, Norwegians appear to suffer very little from all this EU regulation imposed on them.”

Mr Helseth argued that Britons would not feel the same.

He explained: “Norwegians tend to take the view that, as a country of five million, Norway’s vote would seldom tip the scales in EU decision making. Generally it aligns with its Nordic neighbours, Britain and the Netherlands on key matters such as labour market flexibility and free trade.

“Given the horse-trading nature of EU politics, Norway might have more often punched above its weight than its people assumed if it were an EU member. Finland, with a similar population size, has regularly proven that possible.

Economic loss per EU member state in case of a no deal Brexit (Image: GETTY)

“But indeed, Norway would rarely be setting the agenda; its absence from EU decision making should therefore matter mainly to Norwegians, and less so to others. Should Britain decide to leave, however, the scales would tip for real.”

With a ‘Norwegian solution’, Mr Helseth claimed, the UK would be obliged to keep implementing EU regulations to keep that market access: regulations then dominated by French, German, Italian, Polish and Spanish politics; regulations with which the UK would certainly be less comfortable.

The former adviser concluded in his piece for The Independent that, when it comes to accessing the single market, the UK cannot have its cake and eat it.

He added: “While I may not personally agree with all UK positions, British influence in EU politics is to my mind critical in retaining a balanced EU that can secure our welfare and progress.

“I firmly believe it is in Britain’s interest to refine and widen that influence, rather than leaving the playing field entirely to other EU powers.”