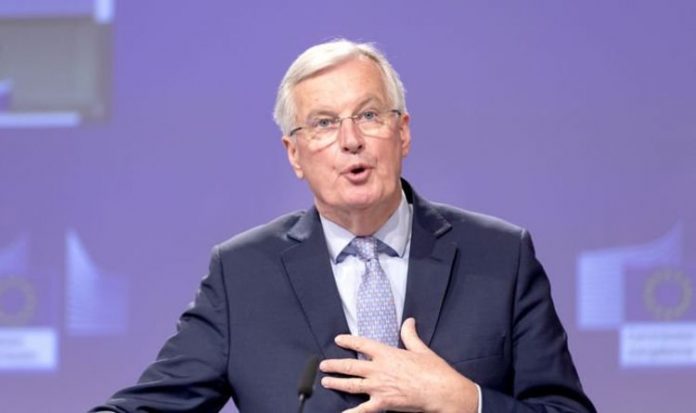 The EU chief negotiator will meet Boris Johnson’s Task Force Europe head Lord Frost to try to kick start the deadlocked discussions. The pair are expected to hold informal talks in Downing Street ahead of the eighth round of formal negotiations in London next week.

Officials arranged tomorrow’s meeting to try to inject fresh momentum into the wrangle following despair on both sides at the lack of progress during last month.

And tensions rose yesterday when French foreign minister Jean-Yves Le Drian blamed the deadlock on the “intransigent and unrealistic attitude of the United Kingdom”.

In an outburst to French ambassadors, he claimed the EU would not buckle to accept Boris Johnson’s demand for a free trade deal without guarantees of European fishing rights and commitments to obey a host of Brussels regulations.

“On Brexit we always showed unity and proved wrong those who saw signs of an overall implosion of Europe. It is in staying united that we can stick to our line of a global accord,” Mr Le Drein said.

British officials hit back, accusing the EU of making it “unnecessarily difficult to make progress”.

A spokeswoman said: “We have been clear from the outset about the principles underlying the UK approach: we are seeking a relationship that respects our sovereignty and which has a free trade agreement at its core, similar to those the EU has already agreed with like-minded countries.

“However, the EU is still insisting not only that we must accept continuity with EU state aid and fisheries policy, but also that this must be agreed before any further substantive work can be done in any other area of the negotiation, including on legal texts, making it unnecessarily difficult to make progress.

“We will continue to work hard to reach agreement and look forward to the next round taking place next week.”