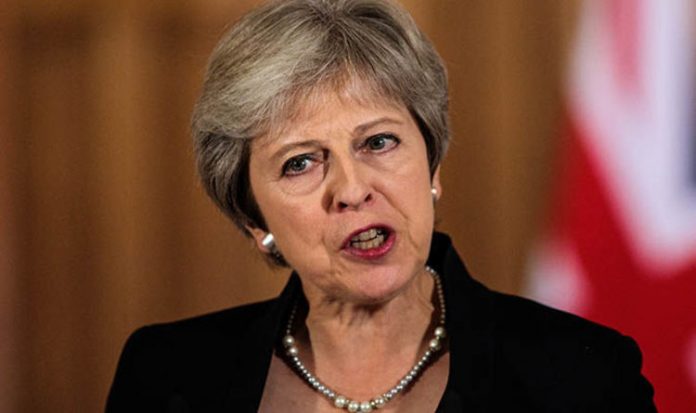 It’s been a tumultuous seven days for Prime Minister Theresa May.

First was the disastrous Salzburg summit last week which saw her Brexit proposals rubbished – with a mocking Instagram post from EU chief Donald Tusk adding salt to the wounds.

Then came the fiery speech she delivered on Friday, demanding “respect” from the EU and calling negotiations “at an impasse.”

And today, the Institute for Economic Affairs (IEA) set out an alternative proposal to Mrs May’s Chequers plan called “Plan A+: Creating a Prosperous Post-Brexit UK,” which Brexiteer Jacob Rees-Mogg billed the “most exciting contribution” to the Brexit debate in months.

Number 10 is insisting the cabinet remains firmly behind Mrs May’s Chequers plan, despite growing calls from within the Tory party to change direction.

Mrs May is sticking by her proposal, telling the EU it is their turn to bring negotiating points to the table if they want to reach a deal.

Meanwhile, fears of a no-deal Brexit are growing, with ministers warning today of disruptions to short-haul flights if the UK crashes out.

What happened in Salzburg?

What Mrs May had hoped would be the first step towards EU leaders accepting her Chequers proposal for a Brexit deal ended in tatters as the proposals were rejected.

EU leaders led by Donald Tusk and Emmanuel Macron rejected her Chequers plan as it stood, prompting hard Brexit Conservatives to demand it be abandoned.

Brexit news: Mrs May during the fiery speech she delivered on Friday (Image: Getty)

EU Council President Mr Tusk declared Chequers “would not work” while French President Macron said it was “not acceptable”.

Mr Macron accused Brexiteers of lying about how easy it would be to negotiate an exit from the EU on terms favourable to the UK.

He said: “Those who explain that we can easily live without Europe, that everything is going to be alright, and that it’s going to bring a lot of money home are liars.

“It’s even more true since they left the day after so as not to have to deal with it.”

Brexit news: Mrs May felt she had been stung by her treatment in Salzburg. (Image: Getty)

What did Mrs May say on Friday?

The Prime Minister struck a firm note with the EU going forward, saying she has always treated the EU with respect, and she demands the same in return.

The comment on respect was particularly poignant, showing clearly she felt she had been stung by her treatment in Salzburg.

Mrs May defended her plan for a common rulebook on goods and a facilitated customs arrangement as the only path to respecting the referendum result and avoiding a hard border in Northern Ireland.

She accused Donald Tusk of rejecting her Chequers proposal without offering any countermeasures.

She said: “At this late stage in the negotiations, it is not acceptable to simply reject the other side’s proposals without a detailed explanation and counter proposals.”

She ended with a good faith offer both to people in Northern Ireland and EU citizens, saying she would protect their rights.

She insisted: “The EU should be clear: I will not overturn the result of the referendum. Nor will I break up my country.

Will Theresa May deliver a deal?

In her speech, Mrs May said: “We must and will continue the work of preparing ourselves for no deal.”

This could indicate she’s viewing the possibility as more and more of a reality.

But in response to her speech, Mr Tusk said: “Out of respect for the efforts of PM May, we will treat the Chequers plan as a step in the right direction.”

He added: “While understanding the logic of the negotiations, I remain convinced that a compromise, good for all, is still possible.”

The next significant step for Mrs May is the Conservative conference this weekend, commencing on September 30.

The number of Tories who say they won’t vote for the Chequers plan seems to be growing by the day and any deal she negotiates with the EU has to get through Parliament.

There is enormous pressure from the Brexiteer-wing of the party for her to rip up Chequers and throw her weight behind an enhanced version of Canada’s 2016 deal with the EU.

After that, a mid-November EU summit is the final crunch. If a deal can’t be agreed upon then, chances of sailing toward a no-deal are almost inevitable.