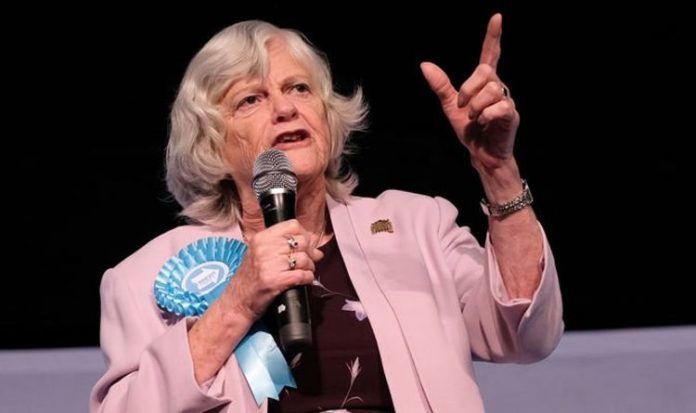 Talks between Brussels and London have been deadlocked over European access to British fishing waters and how much state aide the UK can provide its industries. In response the Government introduced the Internal Market Bill which would supersede parts of the withdrawal agreement.

Appearing on BBC Newsnight Ms Widdecombe argued the EU has been forced to soften its approach.

She said: “Well I certainly detect signs of movement.

“Until we actually took the stand that we took over the internal market bill the EU was behaving very badly indeed. I didn’t see any sign of best endeavours.

“We even had the ludicrous statement from Michel Barnier that of course the UK owned its own waters but it didn’t by any chance own the fish in them. That was the sort of level we were dealing at.

“I think now there’s been a real cold dash of reality and the EU does realise that there’s one thing we’re very insistent on and we’re going to have.”

Under the terms of the Withdrawal Agreement approved by the Government last year Northern Ireland remains closely aligned to the European single market.

As a result it requires some checks on goods travelling between Northern Ireland and the rest of the UK.

Mr Johnson argues this is an unacceptable infringement on British sovereignty.

However, Ms Widdecombe argued Brussels only takes the UK seriously when it is prepared to walk away from talks.

She commented: “We are negotiating as a sovereign state, not as some sort of semi-detached member of the EU.

“We are a sovereign state and one of the reasons why I think in June, when Boris Johnson had his first deadline, that we should have said that’s it and broke up the talks then is I think if we’d done that by now we’d have a deal.

“They’ve only just realised that we have to be taken seriously because of what we’ve done with the Internal Market Bill.”

Britain is currently in a Brexit transition period that concludes at the end of the year.

During this time the UK retains unrestricted access to the European single market but has to continue following lots of Brussels made regulations and making financial contributions to the EU.

If a new deal can’t be agreed Britain and the EU will begin trading next year on World Trade Organisation terms, meaning tariffs will be introduced for many products.

Ms Widdecombe served as a Conservative MP and sometimes Minister for many years before leaving the Commons in 2010.

In 2019 she re-entered frontline politics and was elected as a member of the European Parliament for Nigel Farage’s Brexit Party.

Britain left the EU in January after voting for it by a margin of 51 percent to 49 percent during the June 2016 referendum.