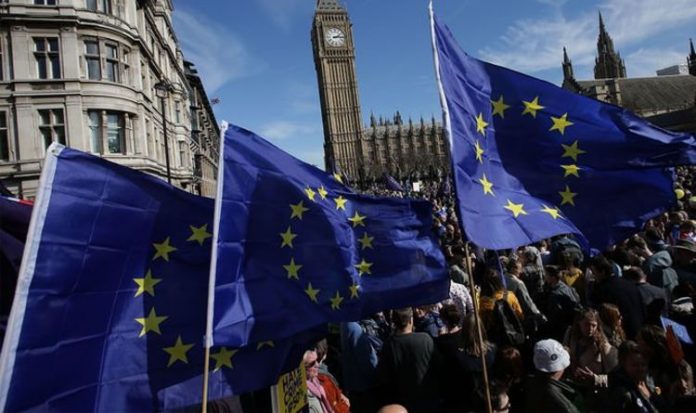 They replaced the usual “The Garden of England” slogan with “The Toilet of England using “scissors and stickers”. EU Flag Mafia, a group formed to oppose Brexit, said they were behind the stunt.

It appears ‘toilet of England’ is a reference to lorry drivers needing the loo if they get caught in traffic jams when the Brexit transition period ends at the close of this year.

There are concerns the need for increased checks will cause bottlenecks around major ports like Dover.

Currently the Government is attempting to negotiate a new trade deal with Brussels, to prevent the UK and EU trading on World Trade Organisation (WTO) terms from January 1.

Speaking to The Guardian a spokesman for the EU Flag Mafia said: “It is utter madness.

“Just this week they tested the border controls at Dover and there were tailbacks as far as the eye could see.

“There were even headlines about it in the New York Times.

“We are an international laughing stock.

“Something has to be done: there are already bottles of urine thrown in laybys and bags of excrement hanging off trees.

One man from Yorkshire commented: “The petulant, infantile antics of swivel-eyed Remainers never ceases to amaze.”

Another added: “Loopy left sink to toilet level yet again.”

Britain formally left the EU at the end of January, but remains in a Brexit transition period until the end of this year.

During this time the UK remains in the European single market and still has to pay into the EU budget.

It also still has to implement a big proportion of Brussels legislation.

However this will finish at the end of the year, after which Britain will trade with the EU on new terms.

The Government is currently negotiating with Brussels in the hope of agreeing a new trade agreement.

However the two sides remain divided over European access to UK fishing waters and to what extent Britain can deviate from the EU’s “level playing field” for regulations.

Face-to-face talks will resume this weekend with Michel Barnier, the EU’s head negotiator, having arrived in London.

They were paused after one of Mr Barnier’s colleagues tested positive for coronavirus last week.