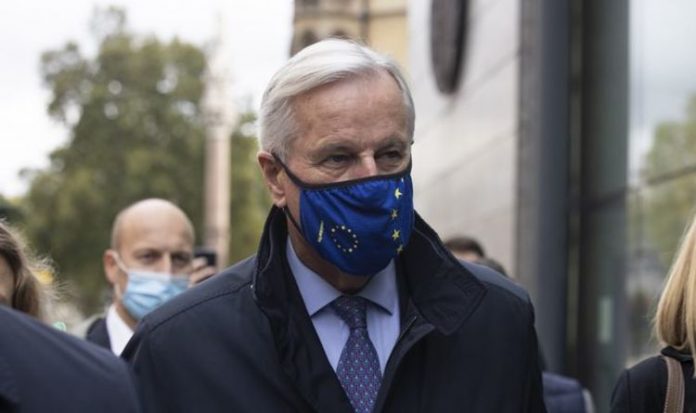 The EU’s chief negotiator had originally planned to return to Brussels today. However, sources from both sides of the discussions have reportedly agreed to make compromises, meaning there is now some optimism a post-Brexit trade deal could be reached.

As such, Mr Barnier’s team will remain in Britain to hold further discussions.

The original plan was for Britain to send its own negotiating team headed by David Frost to Brussels on Thursday to continue the talks.

One source told the Sunday Telegraph the negotiators had managed to find solutions to over 90 percent of the various stumbling blocks that have prevented a trade agreement being agreed so far.

Another said Mr Barnier had made the decision to stay partly because of coronavirus concerns.

Rising cases in Belgium’s capital mean it may have been awkward for the UK’s large team of negotiators to have to travel to Brussels later next week.

The news comes after Cabinet Office Minister Michael Gove claimed earlier this month there was a two-in-three chance of Britain and the EU agreeing to a Brexit deal.

The Government has stressed the importance of keeping to a deadline in order to prepare for a no-deal Brexit with certainty if necessary.

This week of talks essentially means the deadline for a deal is Halloween, October 31.

Last year, the same date was set for Britain’s actual exit from the EU, with Prime Minister Boris Johnson remarking he would rather be “dead in a ditch” than have the deadline extended past that.

However, the deadline was eventually extended until January 31 2020 – the third extension date – when the UK officially left the EU.

The news comes after business group Logistics UK warned a no-deal scenario could see import costs on some items rise by nearly a third.

This is assuming the UK operates under World Trade Organisation tariffs if it does not secure a deal with the EU.

Logistics UK CEO David Wells said: “This will make the household shopping basket much more expensive, particularly in the early part of 2021 when we rely on imports for much of our fresh food.”

Meanwhile, the UK on Friday announced it had secured a post-Brexit trade deal with Japan – Britain’s first.

The deal will see almost all tariffs removed on British exports to Japan, while UK tariffs will be taken off of Japanese cars by 2026.

The deal could increase trade between the two nations by around £15 billion, though Japan’s Foreign Minister Toshimitsu Motegi warned a UK-EU deal would still be important for Japanese car factories based in Britain because of parts supply.