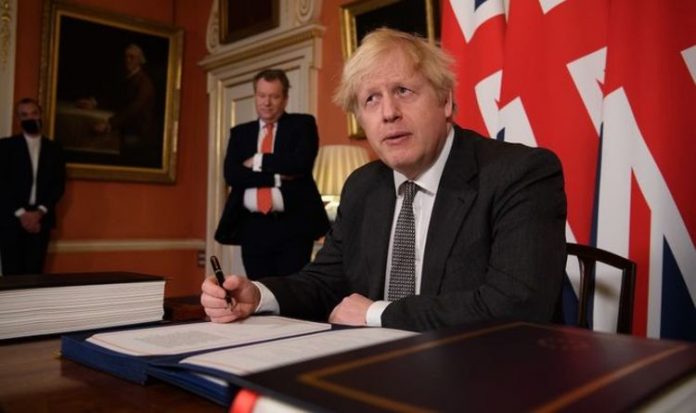 It comes after MPs voted yesterday to pass the bill, paving the way for the agreement to come into force at 23:00 tonight. It means the UK will leave the EU with a trade deal in place, as opposed to a no-deal situation.

Daniel Kawczynski, Conservative MP for Shrewsbury, said on Twitter: “I had the opportunity today to meet and personally thank the Prime Minister for the deal he has negotiated with the EU. He has shown tremendous leadership and deserves our thanks.”

He also referred to yesterday as a “momentous day” ahead of the deal being voted in.

James Sutherland, Tory MP for Bracknell, said: “It is now time to heal the Brexit divisions, make this work and look forward to 2021 and beyond with confidence.”

MPs who voted against the deal also spoke out. Munira Wilson, Liberal Democrat MP for Twickenham, called the Parliamentary debate a “complete affront to democracy” because of its short length.

She added, on Tuesday: “It’s an absolute disgrace that we have only five hours tomorrow to debate legislation that has only just been published, giving power to a treaty that is over 1,500 pages long and only published three days ago.”

READ: Brexit: What savers should do as interest rates are set to remain low despite deal

The SNP, Lib Dems and the DUP had all indicated they would oppose the Brexit deal ahead of the vote.

It came despite Labour leader Sir Keir Starmer’s efforts to put pressure on his party to support the bill in order to avoid a no-deal situation.

Boris Johnson said in a statement: “The destiny of this great country now resides firmly in our hands.

“I want to thank my fellow MPs and peers for passing this historic Bill and would like to express my gratitude to all of the staff here in Parliament and across government who have made today possible.

“11pm on the 31 December marks a new beginning in our country’s history and a new relationship with the EU as their biggest ally.”

His positive tone appeared to be partly mirrored by Jacob Rees-Mogg, who issued a statement yesterday praising the Europe’s Brexit negotiator Michel Barnier.

Mr Rees-Mogg said: “Many eurosceptics have a striking admiration for Barnier, who epitomises Gallic sophistication, and who had successfully outfoxed previous British negotiators.”

Mr Johnson signed the deal shortly after the vote. It had been physically flown to Downing Street by the RAF after being signed by European officials Charles Michel and Ursula von der Leyen earlier on Wednesday.