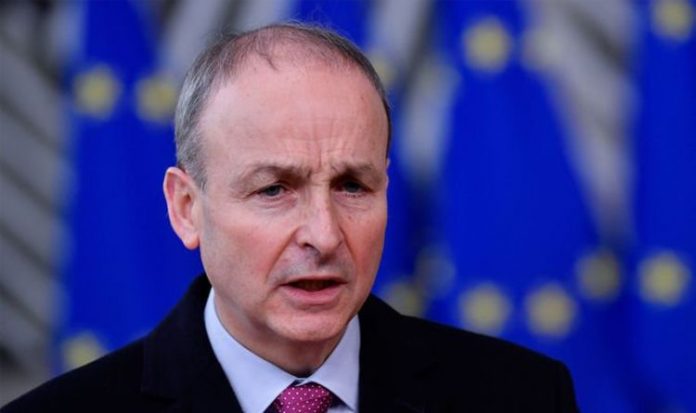 Tensions are surging over Northern Ireland with Brussels accusing the UK of failing to properly implement agreed border checks. Meanwhile unionists in Northern Ireland are furious at the introduction of new checks on trade to Great Britain and are demanding they are removed.

Under the terms of the Brexit trade deal agreed by Boris Johnson Northern Ireland remains attached to the European single market in order to prevent a border with the Irish Republic.

However this means there is a border along the Irish Sea with regulatory checks on trade to other parts of the UK.

Mr Martin was speaking ahead of a crunch meeting between Cabinet Office minister Michael Gove and Maros Sefcovic, the European Commission’s vice-president, to discuss the impasse.

The Irish Prime Minister called for both sides to use more restrained language.

Speaking to RTE radio he said: “There are elements that the British Government could sort out, but likewise on the European side, I would say some member states need to cool it as well.

“I think we need to dial down the rhetoric on both sides here.”

Mr Sefcovic wrote a letter to the British Government claiming Northern Irish customs posts are “not performed in compliance with the Withdrawal Agreement” and have “very few identity checks”.

He alleged Border Control Posts in Northern Ireland are “not yet fully operational”.

On Twitter he posted: “The Northern Irish protocol was always unnecessary and needs scrapping.”

In his letter to the British Government Mr Sefcovic said: “The United Kingdom’s withdrawal from the Union, its single market and its customs union presents unique and significant challenges for the island of Ireland.

“The protocol is the solution agreed by the UK and the EU to these challenges: it is the only way to protect the Good Friday (Belfast) Agreement, preserving peace and stability and avoiding a hard border on the island of Ireland.

“I therefore agree that our shared objective is to work tirelessly in order to make the protocol work.

“It requires full and faithful implementation by both parties.”

Additional checks are due to be imposed along the Irish Sea in the coming months as a period of grace expires.

The EU has so far refused a British request to extend this transition period.

Ms Foster said there had been a “coming together of unionism” around this demand.

However Sinn Fein, the main nationalist party in Northern Ireland, are insisting the protocol remain in place.