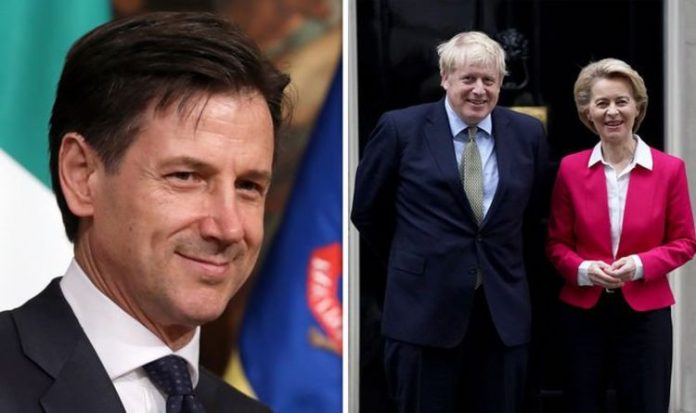 The events of Friday night, and of the preceding few days, have not gone unremarked in the European press. Fears over delays in receiving vaccines and questions over procurement and investment were all brought into focus this weekend after the EU’s announcement of potential export controls on vaccines produced within the bloc. Germany’s Die Zeit said the European Commission had unwittingly provided “the best advertisement for Brexit”.

It wrote: “[The Commission] is acting slowly, bureaucratically and in a protectionist manner. And if something goes wrong, it’s everyone else’s fault.”

Die Welt was similar in its analysis of the situation, accusing European Commission President Ursula von der Leyen of a hugely counterproductive strategy.

It said: “Hardliners in the UK will not forget von der Leyen’s Brexit own-goal, and will use it as a welcome template if torpedoing the Brexit agreement pays off domestically.

“Meanwhile, pro-Europeans on the island will increasingly be wondering whether the departure from Brussels was such a bad thing after all.”

Vaccines are not the only thing EU member states are praising Brexit Britain for, though.

The Director General of Italy’s Customs and Monopolies Agency (Adm) Professor Marcello Minenna has recently claimed Britain’s withdrawal from the bloc may prove to be a huge opportunity to make the Italian customs system even more efficient.

Mr Minenna argued that with the introduction of free zones, compliance costs can be reduced by about 20 percent.

‘Free zones’ are enclosed areas within the customs territory of the EU where non-Union goods can be introduced free of import duty, other charges (i.e. taxes) and commercial policy measures.

He explained: “We will allow customs activities anywhere in our country.

“Basically, a manufacturing company that works in exports, in its relations with the United Kingdom – now excluded from the EU customs territory – will be able to fulfil customs formalities at the nearest office or even at its own production plants.

“In this way we also protect the Italian system.”

When asked whether there could be any competitive risks within the EU, Mr Minenna said: “The countries closest to the UK have already equipped themselves. Just think of the measures adopted by Belgium and France… they have created the so-called ‘logistic envelope’.

“A system that generates simplified logistic corridors to and from Great Britain.”

He added: “According to our estimates, compliance costs can be reduced by about 20 percent of the current figure. It is a process that starts from afar and that will increasingly tend to expand.

“In fact, in addition to the common procedures, with the ‘simplifications decree’, the government has entrusted the General Manager of Adm with the power to designate free customs zones.

“A company that establishes its production in one of these free zones does not have to follow border rights, such as import duties and VAT on the goods introduced, as well as benefiting from income tax concessions.

“In essence, customs flows are simplified and, in those areas, goods can undergo all the transformation processes typical of our manufacturing companies, also to be eventually exported, creating a cost saving which, as anticipated, we prudently estimate to be at least 20 percent.”

In January, the UK opened a bidding process for the creation of up to 10 new free ports, promising they are a simple way to “turbo-charge” the economy, especially in deprived areas.

Freeports are similar to free zones.

The difference is that a freeport is designed to specifically encourage businesses that import, process and then re-export goods, rather than more general business support or regeneration objectives.

The country has had free ports before, but those – established in the Eighties and Nineties in ports like Liverpool and Tilbury – eventually withered and died.

All they could offer was freedom from customs duties, and this was not enough on its own, as more or less the same benefits could be gained by importers and exporters through normal customs procedures.

This time around, UK freeports will have greater attractions, and the official news announcement listed the three key elements envisaged: streamlined planning processes, package of tax reliefs and simplified customs procedures and duty suspensions on goods.

These key elements are similar to the ones enjoyed by Singapore, which has boosted its economy thanks to the creation of free ports.

According to the Sunday Telegraph, the ports in Britain will be “fully operational” within 18 months of the UK leaving the customs union and single market.

Freeports already exist in places including Geneva, Luxembourg, Singapore, Beijing, Monaco and Delaware, where they are often used to store valuable assets.

EU freeports, though, are much more limited in their powers than other free ports around the world.