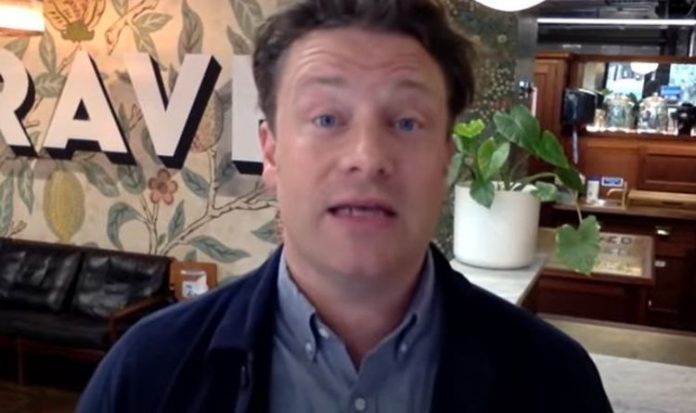 Downing Street is to reject demands by Tory rebels and campaigners for tougher food standards rules in order to keep future post-Brexit trade deals on the table. Prime Minister Boris Johnson has repeatedly claimed that the UK will maintain food and welfare standards outside the EU and dismissed concerns about lowered food standards as “hysterical”. However, celebrity chef and former Remain campaigner, Jamie Oliver, warned LBC there was a loophole that would allow the UK to drop standards without scrutiny. His comments sparked a furious backlash, with some on Twitter dismissing his claims as “ridiculous” and accusing him of “whinging”.

He told host James O’Brien: “We’ve got a Government that is saying all the right things. They’re disarming us by saying, ‘please do not worry, these food and agricultural standards are law’.

“But at the same time they have this lovely little trump card which is called secondary legislation, which means they can change whatever they like whenever they like without Parliament.

“My only beef is that Parliament is there for a reason: to scrutinise, debate or bring in the best, cleverest minds in environment or business or whatever and they are being potentially sidelined.

“What I don’t like is being disarmed by all the right noise but I know they have this ratchet.”

Mr Oliver continued: “When they get into the woods of negotiation and trade that, out of side out of mind, things will be done to get stuff done quickly.

“What’s Britain going to do when big old America comes in? Or any other country like Japan? There’s many deals on the cards.

“We have got to protect the trust and the capacity to be best of practice, and to not stack it high and sell it cheap.”

Miele Rodrigues added: “They’re quite litigious in the USA. I’m not concerned about their chicken but if I was I wouldn’t buy it. Like I didn’t go to Oliver’s overpriced restaurant.”

Tony joked: “Has he ever eaten in the restaurant named after himself in Leicester Square? Food quality in there is horrendous but he still put his name to it.”

One person tweeted: “I wonder if either of this pair have travelled across the pond and refused to eat anything on these grounds?”

Another replied: “Are we using celebrity TV chefs as trade experts now?”