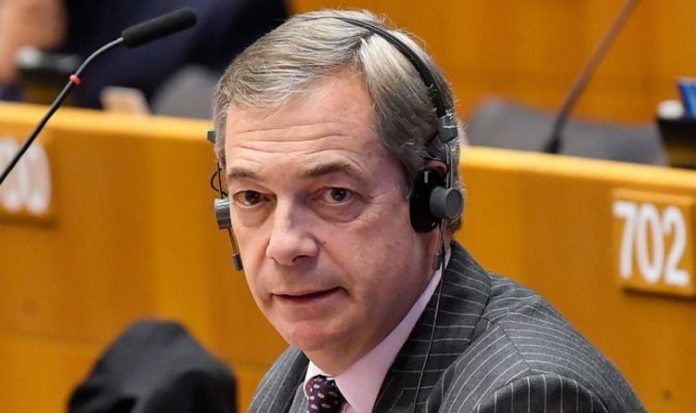 The former Brexit Party leader reports each vessel can catch “up to 250 tonnes of fish every day”. Mr Johnson’s Brexit deal caused outrage in many fishing communities, with much of the catch from UK waters left in European hands until 2026.

Additional border controls have also made it harder for British fishermen to export to the EU, with some produce like shellfish going rotten due to the bureaucratic delays.

Writing for the Daily Telegraph Mr Farage celebrated the return of bluefish tuna to UK waters and argued controlled recreational fishing of the ocean beast could help kickstart the economies of British coastal communities.

He said: “Bluefin tuna is back in British waters in huge numbers and, if managed correctly, this could bring a significant boost to fishing businesses.

“Their presence could also heighten the tourist trade in many parts of the country.

“This could bring a significant boost to fishing business” (Image: GETTY)

“I am certain that a well-regulated catch-and-release fishery would see anglers from all over the world flocking to the West Country, Wales and northwest Scotland to enjoy it.”

Whilst Britain was an EU member there was a near-total ban on catching bluefish tuna in UK waters.

However according to Mr Farage during this time “the French and Spanish were allowed to land 24,000 tonnes of tuna every year”.

A quota for 50 tonnes a year has since been introduced for UK waters, but Mr Farage wants this to be significantly expanded.

He wrote: “To make all of this work, the government must act quickly. The international body to which tuna catches are agreed and regulated is the International Commission for the Conservation of Atlantic Tunas (ICCAT).

“As a result of Brexit, Britain is a member of ICCAT in its own right and is therefore able to speak for its communities as it sees fit.

“Our representatives must inform ICCAT no later than the agreed deadline of 15 February if Britain intends to open a regulated recreational fishery this year.”

The leading Brexiteer argued this could be done in an ecologically sustainable way as “sport fishermen, seaside towns and environmentalists all have a vested interest in sustainable fisheries”.

Fishing was one of the most contentious points during Brexit trade talks (Image: GETTY)

Under the terms of the new trade deal agreed by Mr Johnson British fishing boats will take 25 percent of the UK waters catch from EU vessels by 2026.

At this point the UK could theoretically exclude EU boats from British waters, through this could provoke countermeasures like extra restrictions on the export of fish.

The British shellfish industry is under threat after Brussels said that, post-Brexit, UK fishermen would no longer be able to export unpurified molluscs to the European market.

The move sparked anger with exporters holding a protest in Westminster last month attended by 30 vehicles.

The Daily Express has been an enthusiastic supporter of Brexit (Image: GETTY)

Environment Secretary George Eustice has called for a “pragmatic and sensible” attitude from the EU to fix the problem.

However some angry Tory MPs have urged the Government to start boarding European vessels if they enter UK waters in response.

Mr Eustice commented: “It’s quite unexpected and really indefensible that the European Commission made clear only last week that they were going to change their policy on this and, as things stand, put a ban on the trade altogether.

“Previously they’d been clear that this is trade that could continue, and all they needed to do was design the right export health certificate.

“The truth is there is no legal barrier to this trade continuing, both on animal health grounds and on public health grounds – there is legal provision within existing EU regulations to allow such trade to continue from the UK.

“We are just asking the EU to abide by their existing regulations and not to seek to change them.

“They did change their position just last week – prior to that they had been clear that this was a trade that could continue – so we want to work to understand why they are proposing a change at this stage.”