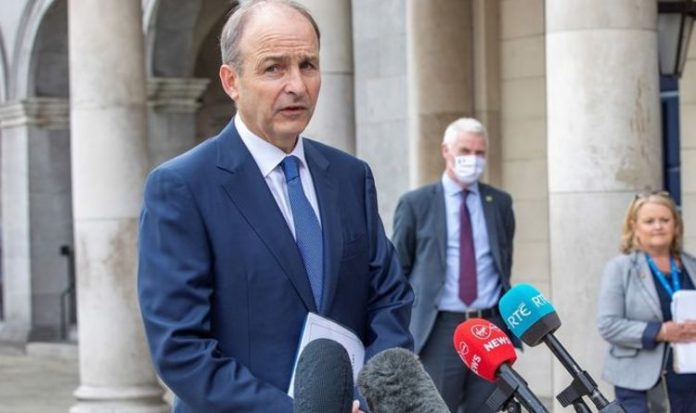 The UK is due to begin its ninth round of Brexit negotiations with EU officials this week, with talks taking place in Brussels. Analysts say the talks will be overshadowed by Prime Minister Boris Johnson’s new Internal Markets Bill, which is likely to be a point of contention.

They will allow Parliament to modify previously-agreed policies – set out in the Withdrawal Deal signed this year – regarding trade between Northern Ireland the rest of Britain.

Mr Martin warned the bill had “damaged the credibility” of these existing agreements between the UK and the EU.

He said in an interview with the i newspaper: “I think progress has been slow in the talks so far, I think there is still potential for a deal, I believe a deal is the sane and sensible thing to do, and I think all of us as politicians have an obligation to those we represent.

“And in terms of Brexit that means the least damage possible to workers, to employers and to business and economy.

“I’m not that optimistic, if I’m honest. Just to let you know that the (Irish) government is preparing its budget in three weeks’ time on the basis that there will be a no-deal Brexit.

“That’s the basis on which we’re preparing the budget and we’re warning and alerting businesses to that terrible reality.”

These include fishing, freedom of movement and state aid, among other key topics.

This refers to business competition rules, which govern how easily governments can grant subsidies to companies within their countries. So far the EU and UK have not agreed on a set of rules both sides want to adhere to.

Mr Barner said there are still “substantial differences of opinion” surrounding the talks, sources close to the discussions told The Guardian.

However, he added from now on there would be a “more open atmosphere at the negotiating table.”

Last week, Thomas Pope, a top economist at the Institute for Government think tank, told Express.co.uk subsidies need to be carefully controlled so taxpayers’ money is not wasted.

He said the UK should design a better system for regulating this than the EU’s current one.

Mr Pope said: “We can design a better system. This government has moved late and fairly dramatically in negotiations with the EU before, so I wouldn’t be shocked if they did that again.

“It’s worth saying that even despite all of the internal market bill stuff, the EU are still negotiating – they haven’t walked away from the table.”