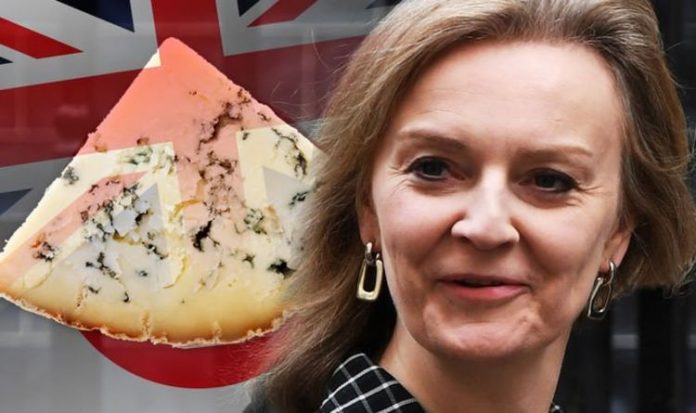 Britain was on track for an early trade victory as Prime Minister Boris Johnson prepared to sign an ambitious post-Brexit trade deal with Japan in a matter of weeks – the UK’s first trade deal after more than 40 years following its departure from the EU. But trade talks have come to a halt after Ms Truss insisted British food be part of the deal, with particular emphasis on Stilton cheese.

She hopes a “win” on Stilton will send a message to the world the UK is able to secure better trade agreements than those by the EU.

But Japan is keen to stick with quotas arrangements agreed with Brussels when it comes to a trade deal with the UK, accordion to the Nikkei Asian Review.

The negotiations come as London and Tokyo work towards replacing the agreement the UK currently has with Japan through the European Union.

Without a new deal by January 1, 2021 the two countries would default to World Trade Organisation (WTO) trading terms.

That would mean tariffs and obstacles to commerce between the UK and its fourth-largest non-EU trading partner.

One business expert revealed this showed the UK was not going to “settle” in a bid to rush out any post-Brexit trade deals.

Atul Bhakta, CEO of One World Express: “The issues that have arisen in the UK-Japan trade talks are telling. Most notably, the UK is benchmarking its future economic arrangement against what it currently enjoys as part of the EU – the Government is clearly reluctant to settle for anything that could be deemed an inferior deal.

“However, holding out for Japan to agree to a more lenient system of tariffs than the EU’s could be dangerous; and the same applies to future deals if this remains the UK Government’s negotiating stance. With 27 nations and a population almost seven times larger than the UK’s, the UK would do well to trade on equal terms to that of the EU: the world’s largest trading bloc.

“A resolution is needed, and fast. Japanese-UK trade was worth £31.4 billion last year, making Japan one of the largest foreign direct investors in the UK. If the Government fails to secure progressive trade deals with other global powers in the months ahead, British businesses will end up bearing the cost later on.”

Ms Truss earlier this month hailed a breakthrough in talks with Japan to secure a trade deal and both announced they will agree on the principles of a trade deal by the end of August.

She said: “We have reached consensus on the major elements of a deal, including ambitious provisions in areas like digital, data and financial services that go significantly beyond the EU-Japan deal.”

Japanese foreign minister Toshimitsu Motegi added: “In most areas, we have reached a substantial agreement.”

Ms Truss previously said: ”The UK-Japan Comprehensive Economic Partnership Agreement will forge stronger ties between two democratic island nations with a shared commitment to free and fair trade, and strengthen the global consensus for open markets at a time of heightened protectionism.

“It will deliver more trade and investment that will benefit businesses and consumers across the whole of the country and help level up our United Kingdom.”

Ms Truss said the Government has been very clear that any deal must work for the whole UK.

The Department for International Trade said the new agreement is expected to increase trade with Japan by around £15billion a year in the long run, boosting wages across the UK by £800million.

Since the beginning of June when negotiations with Japan began, more than 100 negotiators have met and discussed the agreement.