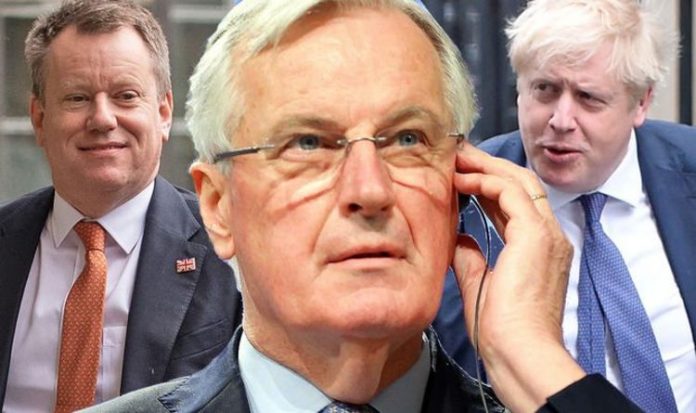 After 12 days of intensified talks, EU and UK negotiators have broken their silence on their progress and updated their political leaders on the state of play. Despite much anticipation, both sides have once again warned that serious divergences remain in the talks. Mr Barnier, the EU’s chief Brexit negotiator, told MEPs on Wednesday that the two negotiating teams are still far apart on issues such as the level playing field and fishing rights.

He wrote on Twitter: “Despite EU efforts to find solutions, very serious divergences remain on the three main outstanding issues. These are essential conditions for any economic partnership.”

His British counterpart David Frost replied: “Progress made, but I agree with Michel Barnier that wide divergences remain on some core issues. We continue to work to find solutions that fully respect UK sovereignty.”

Time is now running out, though, as the end of the transition period is less than two months away.

Negotiations are now paused while both sides reflect on the next step but formal talks are due to resume in London on Sunday or Monday.

Brexit strategist exposes 286 reasons why no deal is STILL better than a bad deal (Image: GETTY)

The Government insists it is still preparing for the possibility that talks will collapse without reaching agreement on a deal before December 31.

However, business leaders are fearing a “dual impact” from both the coronavirus pandemic and a no deal Brexit.

In a recent report, though, Lee Rotherham, the former director of Special Projects at Vote Leave, argued there are 286 reasons why leaving without an agreement in place is still better than a bad deal.

Mr Rotherham explained: “Brexiters have been spending years trying to explain what no deal really is.

“The context is one of international defaults, in trade terms largely based on World Trade Organisation (WTO)terms’.

“But on top of that are the agreements the EU has reached multilaterally with other countries, and also bilaterally – as mini deals.”

Remainers have repeatedly claimed that a cliff edge awaits Britain because the EU will not sign such arrangements, despite both the precedent and “uncontentious nature” of many of them.

They have suggested that the UK could not possibly get an Australian-style deal because of these bolt-ons that turn WTO-only into WTO+ – and with genuinely friendly talks, possibly at least one more ‘+’ on top of that.

For further contextualisation, Mr Rotherham added, Kiribati has 32, Iran a like number, and Mongolia 47.

He continued: “The EU website has finally now put up a key page, listing the bilateral and multilateral agreements to which the EU and UK is a signatory.

“There are 286 such joint agreements in place between the UK and EU. Some no deal vacuum.”

Obviously, Mr Rotherham noted, many of these are relatively small beer, or largely irrelevant to negotiators’ prime areas of concern.

Moreover, a number relating to infra-EU arrangements will presumably fall when the transition period comes to an end.

However, even so, he wrote, the rest form an existing corpus of mini-deals that already go beyond WTO baselines.

He concluded in his piece for GlobalVision: “They show scope for third party cooperation, setting out principles that can be carried across. They include agreements with Israel and also the US over cooperation in Galileo, Conformity Agreements with the Swiss, and air links with Brazil.

“No deal is still today better than a bad deal. But even no deal if tackled head on is an area of unfenced opportunity.”

While Mr Rortherham’s claims might end up being true, in an exclusive interview with Express.co.uk, Ukip’s founder Alan Sked suggested Mr Johnson’s threat to leave without an agreement might soon become meaningless because of the outcome of the US election.

The emeritus Professor of International History at the London School of Economics (LSE) said: “It is no secret that Boris decides things at the last minute.

“He did it with Brexit and will likely do it this time.

“If Donald Trump wins the election, there is obviously more chance that Boris will go for a no deal Brexit.

“He will get tougher all of a sudden, particularly on fishing.”

The prominent eurosceptic added: “If Joe Biden wins, I suspect he will go for a deal so that he won’t upset the Americans over Ireland.”

He claimed that the former Vice President, and the Democrats, were “suspicious” of Brexit, as they see it as the “British version of Trump”.

Mr Goodall wrote: “On top of this, Biden has strong ties with Ireland and the Irish American caucus. He has made clear he expects there to be no consequences to the peace process in Ireland and is essentially committed to the softest Brexit possible.

“At this stage, an FTA is that. No 10 know this and will be cognisant of the fact that no longer in the EU, some (emphasise some) of the UK’s usefulness as its conduit to the block is no longer there.”

He added: “All of this (atop of the big problems at home with lockdown) will make a deal even more likely with Biden in the White House (or about to be).

“I still think that’s likely with a Trump win but clearly, Trump is basically opposed to the EU, in favour of Brexit and wouldn’t care if there’s an FTA either way.”

Mr Biden has also taken a narrow lead over Mr Trump in Georgia, a state the US President must win to maintain a pathway to reelection and that no Democrat has carried since 1992.