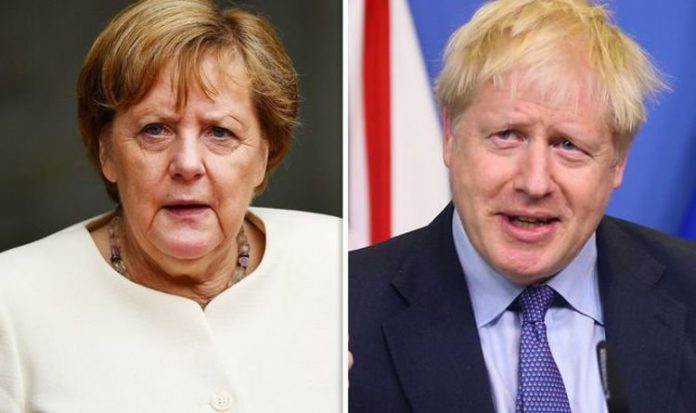 Back in Downing Street, Mr Johnson was upbeat as he declared Britain had secured its negotiating objectives.

According to a leaked Government document, the UK has won 2.5 times more victories than the EU.

The paper, drafted as part of the Government’s attempt to sell the deal to eurosceptic MPs, claims David Frost’s negotiators got their way on 43 percent of the major issues, compared with 17 percent for the EU’s Michel Barnier, with 40 percent of the treaty being a balanced compromise.

The crucial issue of fishing has been described as a mutual compromise, with the Government settling for a 5.5-year transition “during which access is fixed”.

It does indeed seem to be a “mutual compromise”, as both sides have already complained about the new arrangement.

Lib Dem MP for Orkney and Shetland Alistair Carmichael said: “It is no state secret that fishing has been at the heart of negotiations being prolonged and it’s welcome for everyone that there’s a deal at all.

“But on first flush this sounds rather different than what the fishing community was promised.

“A deal with a five-year transitional period is maybe not the biggest difficulty but at the end of it the expectation seems to remain that only 25 percent of quota held by EU nations for British waters will be returned to the UK fleet.”

Back in Berlin, German Agriculture Minister Julia Kloeckner warned of “painful cuts” for the European Union’s fishing industry due to the trade deal the bloc has reached with the UK.

Ms Kloeckner, a member of Chancellor Angela Merkel’s Christian Democratic Union, said she would have liked the cuts to be “significantly lower” while pledging support for the sector.

Ms Kloeckner said in an emailed statement: “It is all the more important that the agreement provides for a transitional period, with defined quota regulations and guaranteed access to fishing grounds.

“This gives at least a certain degree of planning security.

“But it is also clear that we must support the fishermen and give them a hand in this difficult situation. Looking to 2026, it will be important to find a long-term solution.”

French Minister for European Affairs Clement Beaune said the fishing accord was “a difficult effort, but acceptable and doable,” while maintaining that the EU must not go beyond the agreed 25 percent.

He added: “We have ways of applying pressure to ensure – I hope, and we’ll fight for it – that access will be maintained.”

Even before the negotiations on a future trade deal started, the French government had made it clear to the EU’s chief negotiator Michel Barnier that he had to push for stronger commitments on regulatory alignments and access to UK fishing waters in return for maintaining free trade.

He said: “French fishermen are a small but very active lobby group within France.

“A bit like French farmers, they have a clout, a political power beyond their actual numbers.

“I can understand why Macron is playing hardball. He is not doing too well in terms of popularity in those fishing regions at the moment and bashing the Brits never plays badly.

“However, fundamentally, no self-respecting country can agree to the terms he is seeking, and I think he knows that.”

Mr Carswell added: “He is worried about getting re-elected, that is for sure.

“Like so many French Presidents he came in with really high hopes and to be fair to him, he has done something absolutely right in the way he responded to terrorist attacks.

“But, fundamentally, Macron is doing what all French Presidents have done with the overbearing nature of the French regulatory state.

“Trying to stimulate the French economy is a very difficult task and to have the French fisherman antagonising him at the same time must not be easy.”