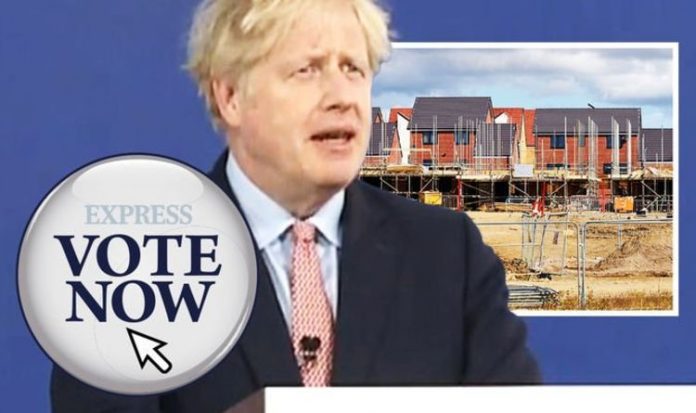 During a rousing speech to the Conservative Party’s online conference, Prime Minister Boris Johnson promised to ”fix our broken housing market” and help young people onto the housing ladder. Mr Johnson said his Tory government would reduce deposit sizes to 5 percent for home buyers as part of a drive to increase the rates of home ownership, especially among the under-40s.

Express.co.uk is asking you is Boris Johnson right to make buying a home easier with this pledge?

The Prime Minister also vowed to “transform the sclerotic planning system” and make it “faster and easier to build beautiful new homes without destroying the green belt or desecrating our countryside”.

Mr Johnson said: “These reforms will take time and they are not enough on their own.

“We need now to take forward one of the key proposals of our manifesto of 2019: giving young, first-time buyers the chance to take out a long-term, fixed-rate mortgage of up to 95 percent of the value of the home – vastly reducing the size of the deposit.

“And giving the chance of home ownership, and all the joy and the pride that goes with it, to millions who currently feel excluded.

“We believe that this policy could create two million more owner-occupiers, the biggest expansion of home ownership since the 1980s.

The 2019 Conservative Party manifesto pledged to “encourage a new market in long-term fixed rate mortgages which slash the cost of deposits, opening up a secure path to home ownership for first-time buyers in all parts of the United Kingdom”.

It comes as Mr Johnson promised to forge a new Britain “in the teeth of this pandemic”.

The Prime Minister promised a revolution in green power generation, reforms to the social care system and improvements in education as he addressed the online Conservative Party conference.

But in the face of Tory unease about the state interventions imposed by the Government to stem the threat of coronavirus, Mr Johnson insisted they were the only steps he could take.

Mr Johnson said: “This Government has been forced by the pandemic into erosions of liberty that we deeply regret and to an expansion in the role of the state from lockdown enforcement to the many bailouts and subsidies that go against our instincts.

“But we accept them because there is simply no reasonable alternative.”

He praised Chancellor Rishi Sunak as he sought to dispel speculation about a rift between the two over the response to the crisis.

Mr Johnson said: “Rishi Sunak, the Chancellor, has come up with some brilliant expedients to help business, to protect jobs and livelihoods but, let’s face it, he has done things that no Conservative chancellor would have wanted to do except in times of war or disaster.”

The Prime Minister said the UK economy went into the pandemic with “chronic underlying problems” which he vowed to address.

“And far too many people across the whole country who felt ignored and left out, that the Government was not on their side.

“And so we can’t now define the mission of this country as merely to restore normality, that isn’t good enough.

“In the depths of the Second World War, when just about everything had gone wrong, the government sketched out a vision of the post-war new Jerusalem that they wanted to build, and that is what we’re doing now, in the teeth of this pandemic.”