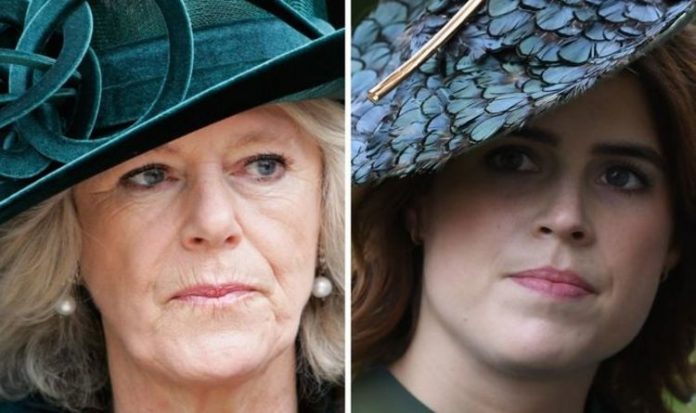 Yet, reports now suggest they have moved back to their Kensington Palace residence.

Eugenie and Jack married in 2018, five months after Harry and Meghan tied the knot.

The occasion was a grand affair, attended by nearly all senior royals and members of The Firm’s inner circle, all except for the future Queen consort, Camilla.

The Duchess wrote the Princess a letter apologising for her absence, as was revealed by the Daily Mail’s royal correspondent, Richard Kay.

At the time, he wrote: “I can disclose that Camilla sent a handwritten letter to Eugenie apologising for being unable to attend.”

A friend told Mr Kay: “She is fond of Eugenie and her sister Beatrice, and is very disappointed that she cannot be there.”

Yet, there existed conflicting opinions over Camilla’s true reason for her absence.

Officially, Camilla was in the Court Circular attending an event at Crathie primary school, the tiny school on the grounds of the Queen’s estate at Balmoral.

JUST IN: Princess Eugenie’s tribute to her mum after 30 years of charity work

“The date of the wedding was known eight months ago so it’s strange Camilla organised her house party this weekend.

READ  Archie Harrison news: 'Impossible' for Meghan and Harry son to 'get to know' both families | Royal | News (Reports)

“It’s hard to see her turning down the invitation as anything other than a snub but she insists she has other engagements that she was invited to first.”

Mr Kay pointed towards Camilla and Prince Andrew’s, Eugenie’s father, shaky relationship, and said the Duchess had not forgotten how he had treated her and Prince Charles during the years following Princess Diana’s death.

A source told him: “Camilla has always felt Andrew could have done more: the Queen listens to Andrew and he could have helped his brother at a time when he had few allies within the family.

“In fact, I would go so far as to say he was deeply unhelpful when support would have meant a huge amount to her and the Prince.

“Looking back to when there was little public sympathy for Charles and Camilla, if not open hostility, it was a case of Andrew playing politics – Camilla hasn’t forgotten.”

Meanwhile, in her first appearance since departing Frogmore Cottage, Eugenie spoke during a video promoting the Teenage Cancer Trust, a charity she and her sister, Beatrice, have worked closely with.

The cottage was given to Harry and Meghan as a wedding gift from the Queen in 2018.

They spent around £2.4million of taxpayers money to revamp the property, only to leave it empty after moving to the US, although they have since repaid the sum.

According to their office, the cottage will remain the Sussexes’ “residence in the UK”.