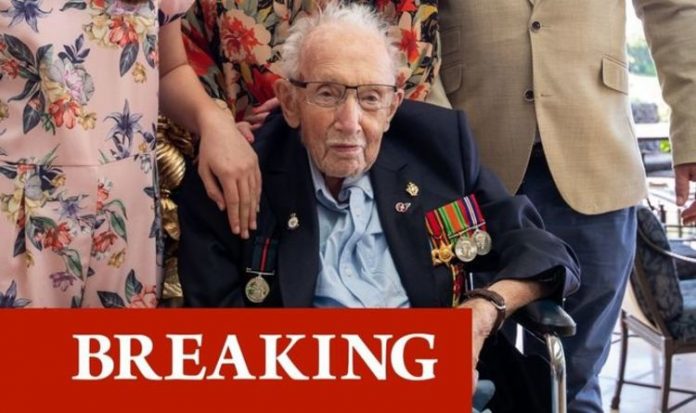 Captain Tom has died in hospital surrounded by his loved ones at the age of 100. Captain Tom had been taken to Bedford Hospital on Sunday after being treated for pneumonia for some time and testing positive for coronavirus last week.

The World War Two veteran captured the nations’ hearts last year after completing 100 laps of his garden and raising more than £32 million for the NHS.

As a reward for his remarkable achievement, Captain Tom and his family were treated to a holiday to Barbados courtesy of British Airways and Visit Barbados.

The family flew out to the Caribbean Island on December 11 before strict coronavirus travel rules came into force in the UK.

In a post on Twitter on December 11, Captain Tom shared a picture of himself smiling as he sat inside the plane before take-off.

In a message, he said a trip to Barbados had ticked another adventure off his bucket list and thanked organisers for making it happen.

Captain Tom wrote: “I never thought that, at the age of 100, I would get to travel again. I’m so grateful to everyone who has made this possible.

“The support I have been shown in 2020 has given me renewed energy and today I get to tick something off my bucket list.

In a statement, the family said doctors were consulted before Captain Tom went on his dream vacation.

They set off more than a week before his hometown of Bedford was placed into Tier 3 on December 19, and later Tier 4 on December 20.

On December 18, the family shared a picture of Captain Tom wearing a pair of shorts surrounded by his family as they enjoyed the warm weather.

On Twitter, they wrote: “Enjoying a beautiful family day in the Barbados sunshine. #TomorrowWillBeAGoodDay.”

The arrived back into the UK from their holiday on January 6.