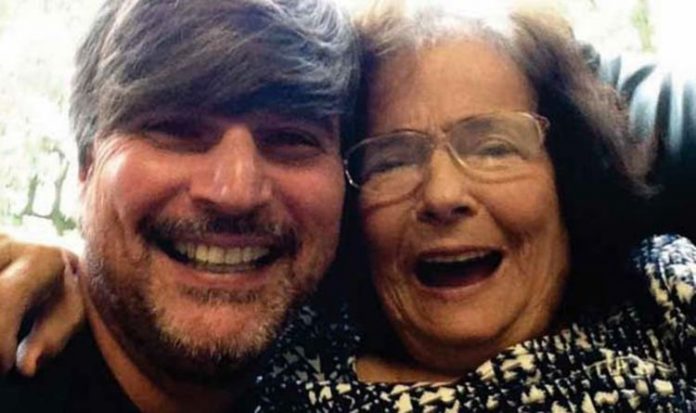 Tony wants children concerned about signs of neglect in their parents’ care homes to be able to put a CCTV camera in their bedrooms. His crusade, supported by the Daily Express, would also let anxious relatives “check in” on loved ones during the pandemic. Tony, 52, is seeking the law change after his mother Antonia, 87, died from COVID-19 in May. Visiting restrictions left her family unaware she was even ill until it was too late.

Antonia, he says, also suffered abuse in care homes and his claim is among the 67,000 made to the Care Quality Commission each year.

Father-of-two Tony, a former Tom Cruise impersonator who once turned down a place in boy band Take That, believes he could have spotted Antonia’s declining health sooner had CCTV been in her room.

He said: “Some care homes are atrocious. I wouldn’t put my dog in some of them.

“My mother has been a victim of abuse personally…I overheard a carer tell her to ‘****ing shut your mouth’.

“That was to my beautiful mum.

She was a lady, yet some scumbag talked to her like that. Examples I’ve heard from other families include hitting, slapping, bruising from being manhandled and neglect from leaving them in bed all day. What gives people the right to treat Britain’s vulnerable that way? We should have choices to monitor our loved ones.

“I loved my mum, she was my best friend. Cameras will not stop everything but will give transparency.”

Loose Women’s Coleen Nolan, 55, said: “In the future it might be your relatives, friends or you. Let’s get behind this campaign.”

Tony said before he died in 1997, his father John instructed him: “Look after your mum.”

Tony said: “I told him, ‘I always will’. It was duty and honour to look after her.”

By 2012 mother-of-five Antonia started developing dementia symptoms and had to be moved to a nursing home.

Because the family did not yet have power of attorney, her care homes were selected by social services.

After making two complaints to two homes about Antonia’s treatment, her family felt she was being “blacklisted” despite the family paying privately for her care.

In 2018 her family finally regained control over where she lived and Tony saw her every day during the first virus lockdown, waving through her bedroom window.

But when he popped by in May, her shocked son found Antonia “sitting in her chair like a corpse”.

Tony said: “I asked staff what was wrong with her and said, ‘She looks dead!’ They said a doctor would see her.”

The home’s nurse later rang to say Antonia was on end-of-life care and it was COVID-19.

Tony insisted she was taken to hospital and there he hugged her for the first time in three months – but it tragically proved to be the last.

Tony said: “She died the next day. I was heartbroken. Doctors said, ‘If only we treated her earlier’. But we didn’t know she was so ill until they rang us.”

Explaining how Antonia’s Law will help relatives monitor loved ones, Tony said: “You could see your parent wherever you wanted on your phone with the camera and check they are okay.”

When the two met in October, Mr Hancock told Tony that he was “horrified” to learn about his mother’s experiences.

Tony said: “Matt said he cannot fault Antonia’s Law and when I told him it was named after my mum he said, ‘That’s beautiful.’

Last year an independent study by carehome.co.uk found 30 percent of home staff would welcome CCTV in communal spaces and bedrooms.

The survey of 2,333 owners and staff revealed 45 percent do not use CCTV anywhere in homes and concluded: “CCTV would provide more transparency and give reassurance to staff, residents and families.”

No stranger to celebrity, Tony, from Hull, was offered the fifth spot in Take That but declined – and Robbie Williams, then 16, got the chance instead.

She said: “It would bring much needed security and reassurance to so many families out there. Especially during this difficult time where family members can feel so very far away.”

Veronica Grey, thr deputy chief executive of the charity Hourglass, which campaigns against abuse of the elderly, said: “No one should be living in fear of degradation or ill treatment.

“Lockdown measures have created a pressure cooker environment for abuse, leaving vulnerable older people at particular risk. We have seen inquiries to our helpline increase by 110 percent.”

A Department of Health and Social Care spokesman said: “Abuse, especially against vulnerable people in care, is abhorrent and we’re determined to stop it.

“Any kind of surveillance must consider the privacy and dignity of those it seeks to record.”