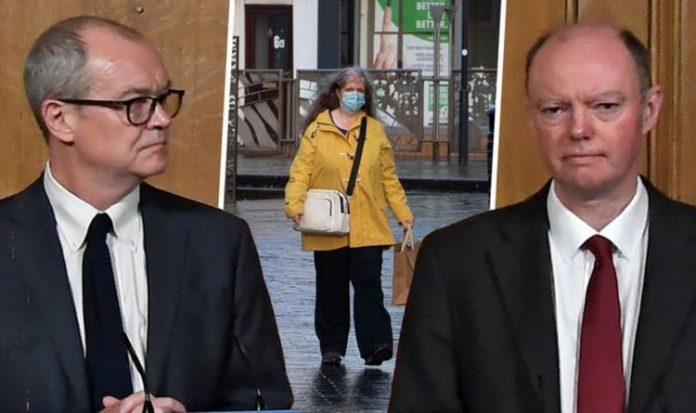 The Chief Scientific Adviser and Chief Medical Officer were forced to explain their evidence to support a second lockdown. It came after the pair were accused of being alarmist and of using out of date graphs to support their rationale for a second lockdown. The Science and Technology Select Committee took place on Tuesday afternoon.

It came after Sir Patrick Vallance revealed graphs that predicted a scenario that warned of 4,000 deaths per day by December 20.

At today’s meeting in front of the parliamentary committee, Labour’s MP Graham Stringer suggested the graph presented by Professor Whitty that suggested “4,000 deaths per day” had “frightened a lot of people around the country”.

Recent data on the reproduction rate since the introduction of the Government’s tier system was not included in the graph.

When asked about the effectiveness of the tier system, Professor Chris Whitty admitted the “three-tier lockdown system was working”

Questioned on the robustness of the “4,000 deaths per day” claim Sir Patrick Vallance defended the data that backed it up.

He told the Committee: “I think I positioned that, and if that didn’t come across then I regret that, but I positioned that as a scenario from a couple of weeks ago, based on an assumption to try and get a new reasonable worst-case scenario.

“And that those figures, therefore, were not as reliable as the six-week figure which I spent time talking about.

“So, those figures were ones done by major academic groups based on those assumptions and, in the spirit of trying to make sure that things are shared and open, they are the things that we have seen, and it’s important and I think people see that.”

“Parliament must have the chance to understand and question the evidence and rationale behind the new restrictions in advance of Wednesday’s debate and vote.

“I am grateful to Sir Patrick Vallance and Professor Chris Whitty for having agreed immediately to my request to appear before the science and technology committee on Tuesday.”

Professor Tim Spector of King’s College London had challenged the need for a national lockdown.

He claimed that just as the lockdown was being put in place the second wave was “running out of steam in the worst affected areas”.

Professor Neil Ferguson of Imperial College has now said the “4,000 deaths per day” is “intended to be pessimistic”.

He also said the graphs were modelled on the assumption the tier system would have a “minimal impact”.

He said: “The ‘up to 4000 deaths a day’ scenarios represent preliminary work to generate a new reasonable worst-case planning scenario to assist NHS and other government planning.”

“The reasonable worst case is intended to be pessimistic.

“These scenarios assumed an R-value of 1.3-1.5 and that the tier system would have minimal impact.”