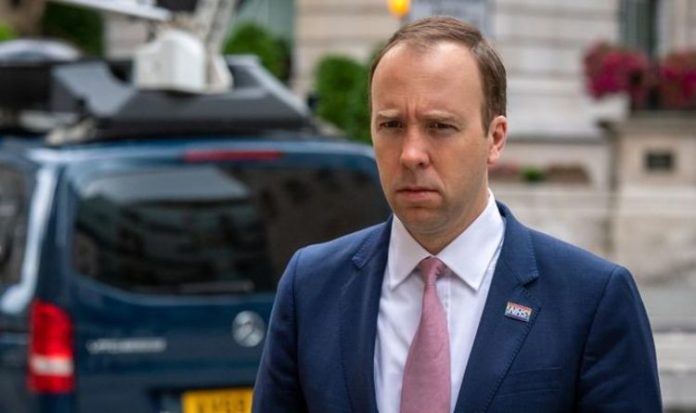 This figure is in stark contrast to the 313,798 positive cases diagnosed since the outbreak began across the UK. Imperial College London carried out a mass coronavirus surveillance study in which 100,000 volunteers used home testing kits to check for antibodies. From that number, the study predicted six percent of England’s population had already been infected with COVID-19 from June 20 to July 13.

If that is true, the coronavirus mortality rate would stand at 1.23 percent of all cases – seasonal flu stands at just 0.1.

Professor Helen Ward who worked on the study stated the virus had been widely spread at the beginning of the outbreak.

She told BBC Breakfast: “What was interesting (about the study) is that we can tell from people who reported not only having a positive test, but we also asked about their symptoms so we can actually track for most people – the 70 percent of people who reported symptoms – when they think they were infected.

“And it did start in January, February, and actually it started right across the country, so you can’t say that it started in London and spread out.

“Right from the beginning it was widely dispersed.”

The volunteers tested themselves for antibodies between the period.

By researching the antibodies, scientists can try to fully determine who has had the virus due to the presence of antibodies.

It allows scientists the opportunity to gain a better view of how the virus is spread.

Health Minister, Edward Argar hailed the study as vital in developing Britain’s battle against the virus.

He said: “Large scale antibody surveillance studies are crucial to helping us understand how the virus has spread across the country and whether there are specific groups who are more vulnerable, as we continue our work to drive down the spread of the disease.

“We don’t yet know that antibodies provide immunity to coronavirus, but the more information we can gather on this virus, and the easier we can make it for people to participate in these studies, the better equipped we will be to respond.

“The British public has already played a massive part in helping to keep the country safe and I’d urge them to consider signing up to one of the many vital surveillance studies taking place over the coming months as part of our national testing effort.“

The authors, however, did add some caution over the research as they could not completely state having the antibodies stops re-infection.

Professor Graham Cooke, the research professor of infectious diseases and research lead at Imperial, said: “Using the finger-prick tests suitable for large scale home testing has given us clearest insight yet into the spread of the virus in the country and who has been at greatest risk.

“These data will have important implications as decisions to ease lockdown restrictions in England.“

The one drawback to antibody testing is the uncertainty surrounding the lifespan of the antigens.

A King’s College London study released last month stated people who have recovered from COVID-19 may lose their immunity within months.

Dr Katie Doores, lead author on the study at King’s College London said: “People are producing a reasonable antibody response to the virus, but it’s waning over a short period of time and depending on how high your peak is, that determines how long the antibodies are staying around.”