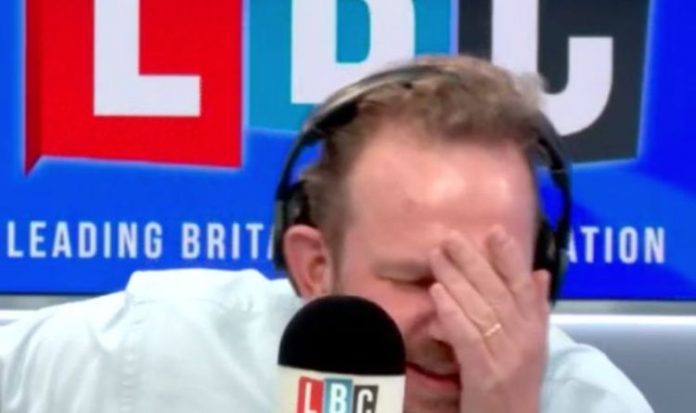 Adam, an LBC caller, shocked radio host James O’Brien when he revealed that his wife, a coronavirus contact tracer, has only managed to make two phone calls since the end of May and both were unsuccessful. The radio caller claimed the first phone call made by his wife was unanswered, while the second person called by her hung up after just 10 seconds. Shocked by the admission, the radio host asked: “She’s been doing the job since May, all day every day and she’s made two phone calls? Since May?”

The caller replied: “Yes, end of May I’d say she started.”

Asked whether he believed this was an exceptional experience as others also told the radio show they had only made less than five calls in three months, Adam replied: “No, and what’s quite interesting is that when you log on there is an indication of how many users are on and it’s usually around the 900 mark for other active users.

“Now, I don’t know if that’s separated geographically or if it’s just overall.

“And then it says available calls and that is usually zero or perhaps the ones that do get called early on because people want to actually do it.

“And the biggest bit of it all is that she’s actually doing overtime this week.

Gobskmaked, Mr O’Brien said: “So we assume that whoever has been awarded the Government’s contract has said ‘we need 500 hours a week from these people’ and they’re just ticking the box.”

Coronavirus contact tracers asked to do overtime despite lack of calls (Image: LBC)

The boss of outsourcing giant Serco has defended the fact that 10,000 contact tracers have only spoken to an average of 2.4 people each.

Rupert Soames, chief executive of Serco, which is among several firms that are recruiting, coaching and managing contact tracers, admitted that the Test and Trace system has “more capacity than we need” but said the Government “had to start somewhere”.

Mr Soames also admitted that 20% of contacts are untraceable as individuals who tested positive do not know them well enough to have their personal details.

His comments comes as an anonymous contact tracer said she is effectively being “paid to watch Netflix”.

NHS England’s Test and Trace system, which is being led by Baroness Dido Harding, relies on identifying people who have been in contact with a positive case and getting them to self-isolate.

But the programme, run by Serco and Sitel through a contract reported to be worth up to £108 million, has faced questions about performance and value for money.

Mr Soames told BBC Radio 4’s Today programme that the Test and Trace programme is “improving all of the time”.

“I think we need to get this into proportion. You’re giving me the numbers saying that we’re tracing 50% of contacts, let me tell you that 96% of the people that we talk to agree to self-isolate.

“So we’ve got a very, very high success rate of people that we get to contact,” he said.

Pushed on the fact that this is only the known contacts that tracers have been able to reach, Mr Soames added: “So there’s been 218,000 already contacted.”

Questioned again on why tracers are still only managing to get hold of half of people’s contacts, Mr Soames said: “If somebody rang you now and I said: ‘Tell me everybody that you have met, been in contact with, in the last 48 hours, and tell me on the telephone, give me their contact details’, how many do you think that you’d be able to reel off of the top of your head?

“So there is an element of that, and it is about 20% at the moment where people can’t remember or never knew the contact… the details of where they were.”

Asked why so many contact tracers are doing so little work, Mr Soames added: “Let me tell you we’ve got 10 Nightingale hospitals lying vacant, we’ve got 30,000 ventilators that are not being used.

“The Government has to start somewhere with capacity and the fact is that we’ve got too much capacity, or more capacity than we need right here, right now, today.

“But naturally the Government has taken a decision to over-provide to begin with on the basis that we can always reduce it.

A leaked email from Mr Soames in June disclosed that he wanted the system to “cement the position of the private sector” in the NHS supply chain.